Bruce Raynor is the President Emeritus of Workers United, an SEIU affiliated union representing 150,000 workers in the U.S., Puerto Rico and Canada who work in the laundry, food service, hospitality, gaming, apparel, textile, retail, manufacturing and distribution industries. Described as a “rising star in the labor movement” (BusinessWeek, April 7, 2003), Raynor distinguished himself as a creative, aggressive and strategic organizer with a broad understanding of the role of labor in North America. He was a pioneer in the area of comprehensive campaigns, beginning with the campaign against textile giant J.P. Stevens early in his career.

Raynor has handled many key negotiations and collective bargaining relationships with companies including Levi Strauss & Co., Liz Claiborne, T.J. Maxx/Marshall’s, the Hartmarx Group, Phillips Van Heusen, Xerox, Delaware North, Hilton, Starwood, and national food service and laundry industry employers such as Aramark, Compass and Sodexo. He has forged productive labor-management relationships in the apparel, textile, hotel, laundry and other industries which have contributed to improved wages and benefits and safer working conditions for working people across North America as well as growth of the union membership.

Raynor began his career in the education department of the former Textile Workers Union of America (TWUA) in 1973, where he worked on numerous southern organizing drives, including the successful J.P. Stevens campaign in the late 1970’s. Based in Atlanta, he went on to organize tens of thousands of workers in the South, including nearly 1,000 Lichtenberg Curtain and Drapery workers in Georgia, 500 shirt workers in Crystal Springs, Mississippi, 3,200 Tultex workers in Martinsville, Virginia, and the giant Cannon Mills complex in Kannapolis, North Carolina. He eventually became the elected leader of 50,000 Southern clothing and textile workers. On the national level he led UNITE and UNITE HERE’s successful drive to organize nearly 50,000 industrial laundry workers, negotiating a groundbreaking defined benefit pension plan as well as healthcare for this largely low paid and minority group of women workers and their children.

Raynor used a combination of aggressive rank and file organizing and alliances with civil rights and community leaders to build worker power. He was responsible for building the ACTWU’s organizing program throughout the United States and Canada, and was subsequently elected to various leadership positions. He was elected Executive Vice President of the Amalgamated Clothing and Textile Workers Union (ACTWU) in 1993 and elected Executive Vice President of the Union of Needletrades, Industrial, and Textile Employees (UNITE) at its founding convention in 1995. Raynor was elected Secretary Treasurer of UNITE in 1999, President in 2001, and was elected General President of UNITE HERE at the union’s founding convention in July 2004. Raynor was elected President of Workers United in 2009. He resigned that position in May 2011. From 2001 until 2005 he was elected and served as a vice president of the AFL-CIO and from 2005 until 2009 he served in the Founding Leadership Council of Change to Win, a new Labor Federation with some 6 million members.

Raynor served as Chairman of the Board of the Amalgamated Bank, America’s only union owned bank with over 4.5 billion dollars in assets from 2001 until 2011. He oversaw its growth as the only true labor bank in North America.

From 1995 until 2011, Raynor served as Chairman of the Board of Amalgamated Life Insurance Company, a union-owned insurance company dedicated to serving the health, disability and retirement needs of working Americans. For the last 20 years, this company has proudly earned an “A” rating from AM best, the widely recognized insurance rating agency.

Raynor has been an outspoken and effective advocate for defined benefit pension plans as the only vehicle suitable to provide the retirement needs of working people. For many years he chaired the National Retirement Fund pension plan, covering over 400,000 participants and over $2 billion in assets. He also chaired the laundry industry pension fund and several others sponsored by the unions he led. Raynor served two terms as co-chair of the Council of Institutional Investors, America’s largest organization of public, Taft Hartley and corporate pension funds holding trillions of dollars of assets and dedicated to principles of good corporate governance.

A long time civil rights advocate, Raynor currently serves on the board of TransAfrica Forum, the oldest and largest African American human rights and social justice advocacy organization in the United States. Currently led by actor Danny Glover, TransAfrica is an educational and organizing center that promotes diversity and equity in the foreign policy arena and justice for the African world.

He is a member of Cornell University’s Board of Trustees since 1988 and serves on the Advisory Board for the Cornell School of Industrial and Labor Relations. He graduated from Cornell’s ILR School in 1972, and in 1999, received the ILR School’s Groat Award for Distinguished Alumni.

He has five children and resides with his wife, Joan, in Nyack, NY. 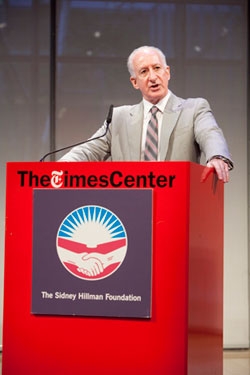