Alexandra Lescaze, Executive Director, is an award-winning documentary filmmaker. Her first film, Where Do You Stand? Stories from An American Mill, told the story of the 25-year effort of North Carolina textile workers to organize a union in the face of modernization and globalization. Her latest film, All of Me, about a group of women who undergo weight-loss surgery, premiered on PBS Independent Lens in 2014. 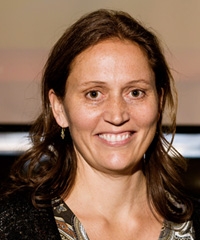