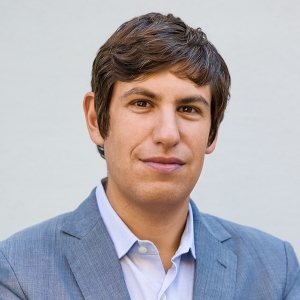 Through dogged investigative reporting and in-depth storytelling, Ari Berman has shined a spotlight on the greatest threat to American democracy: the Republican Party’s unrelenting attack on the right to vote.  There is no bigger issue in American politics right now than the GOP’s multi-faceted efforts to subvert the election system and Berman’s indefatigable reporting has uncovered who is behind it, how they are doing it, and why it matters for American democracy.

Berman produced four major voting rights stories in 2021, any one of which would have been a major contribution, but which jointly establish him as the nation’s preeminent voting rights journalist. Berman has carved out the voting rights beat and dominated it. He skillfully combines reporting and historical analysis to make the subject come alive. 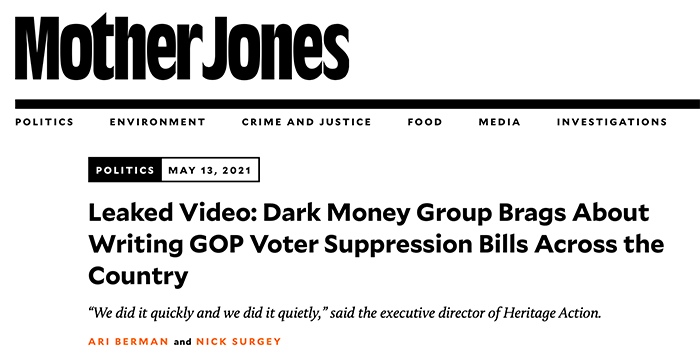 Berman’s Sidney-award winning scoop for Mother Jones with Nick Surgey exposed the conservative dark money campaign to suppress the vote. Their story and accompanying video revealed how, in a closed-door confab with major Republican donors, Heritage Action, the sister organization of the Heritage Foundation, bragged that it had written “model legislation” making it harder to vote in key states including Florida, Georgia, Iowa, and Texas, and was leading the effort to defeat federal voting rights legislation.

The story was highlighted in speeches on the Senate floor by Senate Majority Leader Chuck Schumer and Senator Sheldon Whitehouse of Rhode Island. It was shared by 50 million people on social media and picked up by more than 100 news outlets.

Berman’s feature story in the March/April 2021 issue of the magazine provided a 10,000-foot view of the GOP’s democracy-be-damned embrace of minority rule and how it threatens the American experiment. “This isn’t about which party wins elections,” Berman wrote, “but whether democracy itself survives.”

His cover story for the July/August 2021 issue brilliantly detailed the parallels between the roll back of voting rights at the end of Reconstruction and the attack on voting rights today, combining the historical research, exhaustive reporting, and narrative storytelling that makes Berman’s work so unique.

His multi-media investigation of the Supreme Court’s 2013 decision in Shelby County v. Holder showed how, despite Chief Justice John Roberts’s claim that “things have changed dramatically” since the passage of the Voting Rights Act in 1965, 26 states had enacted new restrictions on voting since that ruling, which opened the floodgates to new voter suppression efforts.

Berman’s reporting kept voting rights at the top of the national discussion, told the story in new and innovative ways, broke major news, and influenced congressional debates and public discussion about this critical issue.

Ari Berman is a senior reporter for Mother Jones and a fellow at Type Media Center. He has written extensively about American politics, voting rights, and the intersection of money and politics. He’s the author of Give Us the Ballot: The Modern Struggle for Voting Rights in America (finalist, National Book Critics Circle Award for nonfiction) and Herding Donkeys: The Fight to Rebuild the Democratic Party and Reshape American Politics, both published by Farrar, Straus and Giroux.

Berman was the first national reporter to cover voter suppression during the 2012 election, earning widespread acclaim for his coverage and pushing the issue into the national spotlight. His stories have appeared in The New York Times, The Washington Post, Rolling Stone, and The Nation, and he is a frequent guest and commentator on MSNBC, C-Span, and NPR. In 2017, Berman won an Izzy Award for outstanding achievement in independent media. He won a Sidney award with Nick Surgey in June 2021 for exposing the conservative dark money campaign to suppress the vote.