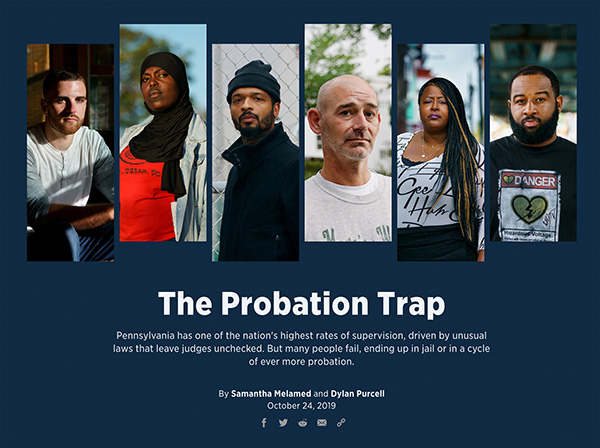 When rap star Meek Mill goes to prison for a technical violation of his probation, it becomes clear that something is terribly wrong with Pennsylvania’s probation system. The Philadelphia Inquirer knows that almost 300,000 people are under “correctional control,” yet no one seems to grasp the scope of the problem, what drives it or how it affects people’s lives. Even those advocating for changes would say things like, “No one really gets locked up for just missing an appointment,” when, in reality, some people have been incarcerated for years for just that.

Reporters Samantha Melamed and Dylan Purcell, through scores of interviews, months of court watching, and first-ever data analysis, showed that probation, often proposed as an alternative to incarceration, is instead a major driver of it.

They conclude that even during a time of falling crime rates, probation has grown unchecked in Pennsylvania because of unusual state laws that set few limits on probation or parole, and a courthouse culture in which judges, working without guidelines, impose wildly different versions of justice. In the region’s courthouses, they uncovered a system of “mass supervision” that routinely punishes poverty, mental illness and addiction.

Those most affected by the system live with the constant risk of re-incarceration. Probation dictates where people can live, with whom they can live, where and whether they can work, and the shape and scope of their aspirations. What seems like a more lenient sentence, proves to be a trap. 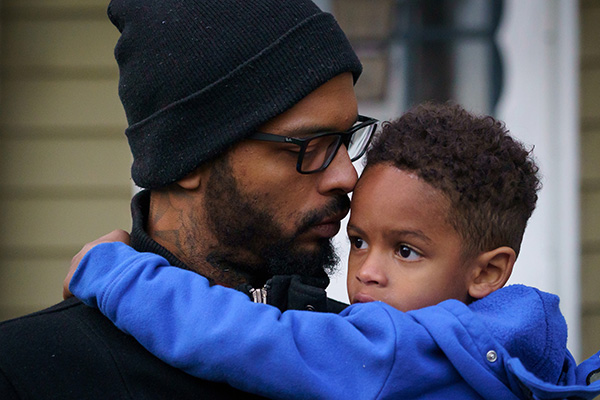 Melamed discovers the only way to get answers is to spend weeks in court, watching proceedings and talking to those involved. Purcell builds numerous data sets that enable the team to identify geographic and courtroom differences and trends over time. They analyzed 700,000 court dockets to identify outlier judges who routinely send people to state prison even if they had not committed new crimes. They pinpoint drug-treatment courts with high success rates tied to the fact that they are packed with marijuana users even as the state struggles with an opioid crisis.

Judges did not truly understood the ramifications of their probation sentences until reading these stories. Drug-treatment researchers admit they’d never recognized the outsized use of court-ordered drug treatment on marijuana users. Defense lawyers and prosecutors, academics and advocates, and state lawmakers have all joined a growing chorus of calls for reform.

Samantha Melamed is a reporter at the Philadelphia Inquirer, writing about the intersection of criminal, social and economic justice. That work has taken her inside prisons, jails, courthouses and communities across Pennsylvania to cover the impacts of crime, poverty, racism and mass incarceration. Her coverage of generations of men incarcerated together in the state prisons was recognized by the Center for Public Integrity as one of the year’s best stories on inequality, by Hunter College’s Aronson Awards for Social Justice Journalism and the Society of Professional Journalists. She was raised in Massachusetts and attended the University of Pennsylvania, where she earned a bachelor’s degree from the Annenberg School for Communication and wrote her first news stories at the Daily Pennsylvanian. She moved to Phnom Penh to cover human-rights abuses and political upheaval for the Cambodia Daily, and, after returning to Philadelphia, served as news editor of the alternative weekly Philadelphia City Paper. She was hired as a features writer at the Philadelphia Inquirer in 2013. Melamed was a 2017 recipient of the Kiplinger Fellowship in Public Affairs Journalism.

Dylan Purcell is a reporter on the Inquirer’s investigative team specializing in data. His work has exposed how police officers who shot at moving vehicles received only light punishment, despite millions paid out by the city to the victims or their survivors. He helped uncover widespread cheating on public school state proficiency tests. He also revealed a high rate of newborn deaths following heart surgery at a for-profit hospital. Purcell was a member of the reporting team that won the 2012 Pulitzer Prize for Public Service for systemic school violence. He was also one of three reporters whose work on toxic conditions inside Philadelphia’s public schools was a finalist for the 2019 Pulitzer Prize in Local Reporting and won the Investigative Reporters and Editors Gannett Award for Innovation in Watchdog Journalism.

Jessica Griffin Jessica Griffin is a staff photographer at the Philadelphia Inquirer. She graduated from Penn State University in 1996 with a degree in history. She is currently pursuing her Master of Fine Arts in filmmaking at Temple University. In 2019 she was a member of the team that was a finalist for the 2019 Pulitzer Prize in Local Reporting for an investigative series that exposed toxic levels of asbestos in Philadelphia school buildings.