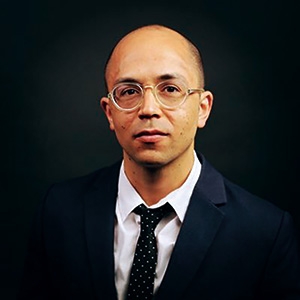 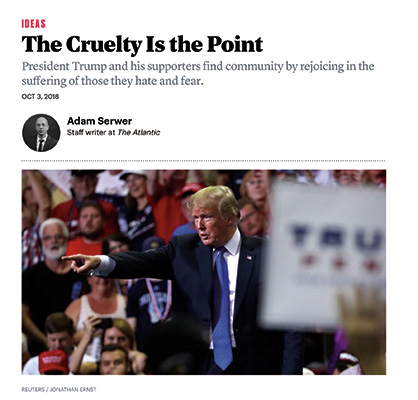 “The cruelty is the point,” Adam Serwer wrote in a seminal essay in The Atlantic in October 2018. “President Trump and his supporters find community by rejoicing in the suffering of those they hate and fear,” he said. The phrase itself crystallized what many Americans found so disturbing about President Trump’s political movement, but the essay it headlined did much more. In his signature style, Serwer offered detailed historical context, abundant evidence and empathy for those he described. And, like much of his work, it proved impossible to dismiss, even by readers who disagreed with his conclusions.

Over the course of 2018, Serwer argued that the rise of Trump could only be understood by setting it within the broad sweep of American history, and that Trumpism was inextricable from America’s tangled, tortured legacy of racism.  Illuminating a wide range of events, debates and controversies, his essays share in common a fierce urgency, and a fearlessness in tackling even the most contentious subjects. Together, they offer a portrait of a nation still haunted by racial injustice and show how the struggle for a more equitable society spills over into every realm – from the arts to politics to the courts. 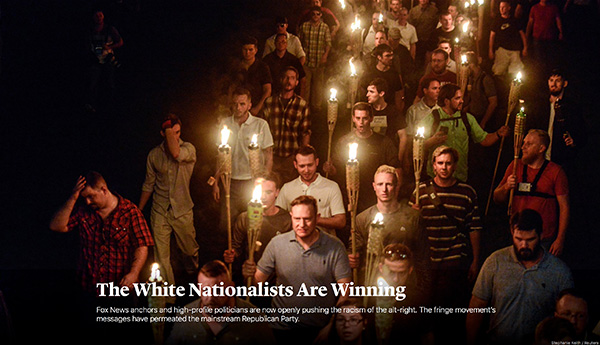 Serwer’s essays are remarkable not only for the power of their prose, but also for the extensive evidence and the specific details he uses to support his claims. Serwer interviews experts, hunts down primary sources in archives, and mines legal rulings. He has a knack for spotting patterns, and for taking individual incidents and setting them within larger patterns of policy and behavior.

Serwer’s work is full of unexpected juxtapositions. He uses powerful parallels tying contemporary events to past atrocities, not for cheap condemnation but as a way to examine the motives and beliefs behind people’s behavior and actions. His examination of the Trump administration’s family separation policy drew on slave narratives, looking back toward other families this nation has torn apart. To understand why a crowd would cheer and laugh as the president mocked Christine Blasey Ford, he turned to souvenir photos of lynchings.

In an essay titled “Why Tamika Mallory Won’t Condemn Farrakhan,” Serwer explores why many black leaders have proven reluctant to denounce Louis Farrakhan. From its personal opening lines, Serwer makes it clear that he finds this reluctance deeply painful. But the essay pushes past that, and moves to Mallory’s perspective, allowing readers to understand her presence at a Nation of Islam event, without excusing it.

Serwer’s essay on the Supreme Court laid out a broad critique of its jurisprudence, arguing that its constriction of civil rights for citizens and its expansion of the same rights of corporations are two sides of the same coin.

All of Serwer’s essays are human, and humane. His work challenges readers to reexamine their assumptions, piecing together moments in the past and present to form a single coherent picture. Readers may not agree with Serwer’s arguments, but they are never in doubt as to how he has arrived at his conclusions. His work calls America to account, asking it to live up to its ideals, while highlighting ways in which it has always fallen short of them.

In our bewildering and chaotic news environment, Serwer has helped readers digest and contextualize major developments. He has consistently helped shape the public debate on current political events. In 2018, Serwer emerged as a defining voice of the Trump era.

Adam Serwer is a Staff Writer in the Atlantic’s Ideas section. He was previously the Deputy Politics Editor at The Atlantic, the National Editor at BuzzFeed News, and a national reporter for MSNBC.