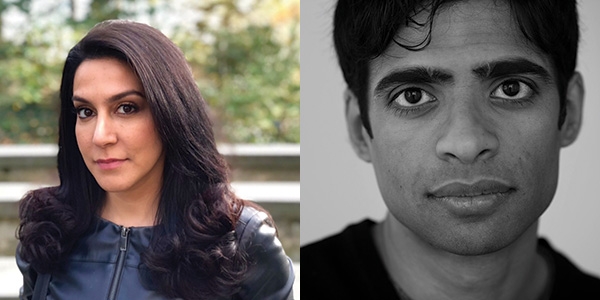 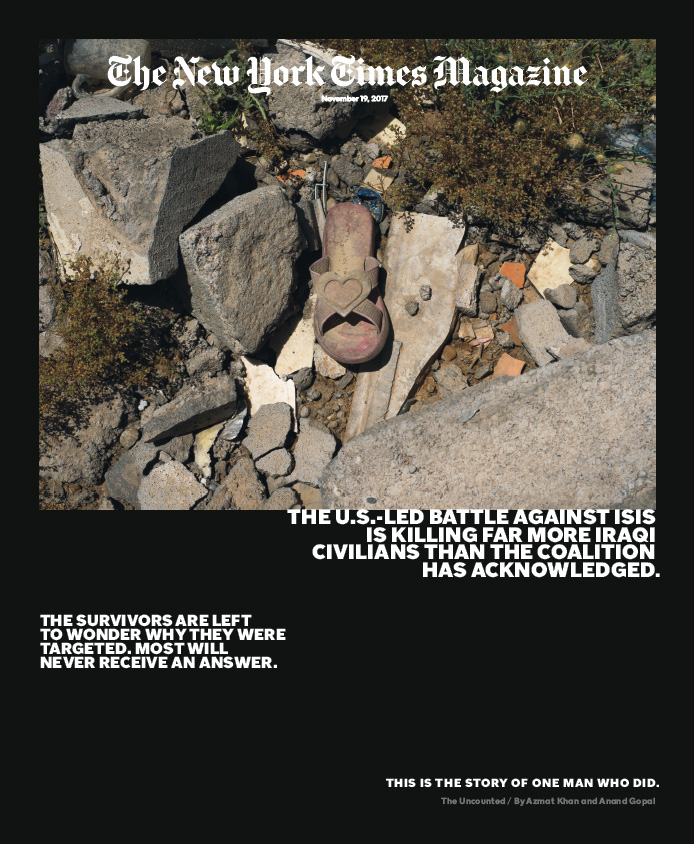 In one of the world’s deadliest war zones, reporters Azmat Khan and Anand Gopal teamed up to investigate, document, and report the true civilian death toll of the U.S.-led war against ISIS. Their shocking findings revealed that the number of civilian deaths due to airstrikes is largely underreported by the American-led coalition, and that there has been a consistent failure by the coalition to investigate claims or to make previously mandated “sympathy payments” to survivors.

Basim Razzo, an American-educated engineer in Mosul, was severely injured and his wife, daughter, brother and nephew were killed, when, one night, with no warning, a coalition strike flattened his home. Left wondering why his family was targeted, Razzo sought to find answers, clear his name from being marked as a possible ISIS sympathizer, and receive compensation from the U.S. government for his loss.  At first the coalition denied responsibility, but based on evidence Khan and Gopal provided, it offered an apology and a “sympathy payment.” Razzo was the first person ever to receive such an offer, in Iraq or Syria, during the entire anti-ISIS war. He refused to accept the $15,000, calling it “an insult to me.”

Khan and Gopal found that the rate of civilian deaths from airstrikes was one out of every five – more than 31 times the rate reported in the coalition’s data. While some of the deaths were a result of proximity to a legitimate ISIS target, they found that half of the deaths were simply a result of flawed or outdated intelligence that conflated civilians like Razzo with combatants.

Khan and Gopal’s disturbing findings are the result of two years spent in Iraq producing the data themselves through hard, on the ground reporting. They visited the sites of nearly 150 airstrikes across northern Iraq and interviewed hundreds of witnesses, family members, intelligence informants, and local officials. They photographed bomb fragments, scoured local news sources, and mapped the destruction through satellite imagery. They built sophisticated databases and maps based on hundreds of points they visited in order to compare their data against the coalition’s numbers. It was a level of research that had never been conducted before – not by the U.S. government, the United Nations nor any NGO.

Khan and Gopal’s reporting is extraordinary in its extensive and innovative approach to data journalism. Now, their methods are being adopted by the United Nations, NGO’s, academic institutions and others, and several groups are planning to implement their methods in Yemen and Afghanistan. The Pentagon is now performing an internal review of targeting procedures.

In addition to their print story and interactive online, the reporters produced, with the Times’ podcast team, a haunting three-episode portrait of Bazim Razzo’s loss.

The overall result is an investigation into the U.S.-led air war against ISIS that is unlike any other. These journalists stepped up to do what the governments and institutions did not.

Azmat Khan is an investigative reporter, a contributing writer for the New York Times Magazine, and a Future of War Fellow at New America and Arizona State University. Her accountability investigations have taken her to conflict zones such as Iraq, Afghanistan, and Pakistan, and have been awarded the National Magazine Award for reporting, the Overseas Press Club award for magazine reporting, the Daniel Pearl Award for Outstanding Reporting on South Asia, the Deadline Club Award for Independent Digital Reporting, and other honors. Khan is an adjunct professor at the CUNY Graduate School of Journalism’s International Reporting program, a fellow at the Macdowell Colony, and a member of the Overseas Press Club’s board of governors. She received an MSt. from Oxford University, which she attended as a Clarendon scholar, a B.A. from the University of Michigan, and studied at the American University in Cairo.

Anand Gopal is a fellow at The Nation Institute, a journalist covering the Middle East, and a scholar studying political violence. His reporting on Syria, Iraq, and Afghanistan has appeared in the New York Times Magazine, The Atlantic, Harper’s, and elsewhere. He is the author of No Good Men Among the Living: America, the Taliban, and the War Through Afghan Eyes, which won the Ridenhour Book Prize, and was a finalist for the Pulitzer Prize and the National Book Award. He has won the George Polk Award, a National Magazine Award, an Overseas Press Club Award for his reporting from Iraq. He received his PhD from Columbia University, where he studied network analysis, and is a professor at the Center for the Study of Religion and Conflict at Arizona State University.