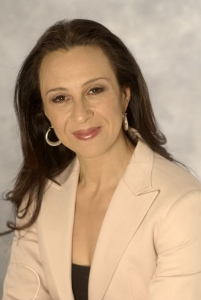 For 25 years, Maria Hinojosa has helped tell America’s untold stories and brought to light unsung heroes in America and abroad.  As the anchor and managing editor of her own long-running weekly NPR show, Latino USA, and anchor of the Emmy Award winning talk show Maria Hinojosa: One on One from WGBH/La Plaza, Hinojosa has informed millions of Americans with stories that reflect the growing diversity of our country. As a reporter for NPR, Hinojosa told groundbreaking stories about youth and violence and immigrant communities.

Hinojosa has won top honors in American journalism including two Emmy’s, the Robert F. Kennedy Award for Reporting on the Disadvantaged, and the Edward R. Murrow Award from the Overseas Press Club for best documentary for her groundbreaking Child Brides: Stolen Lives. She is the author of two books including a motherhood memoir, Raising Raul: Adventures Raising Myself and My Son.