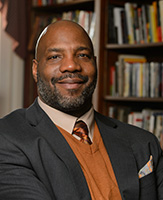 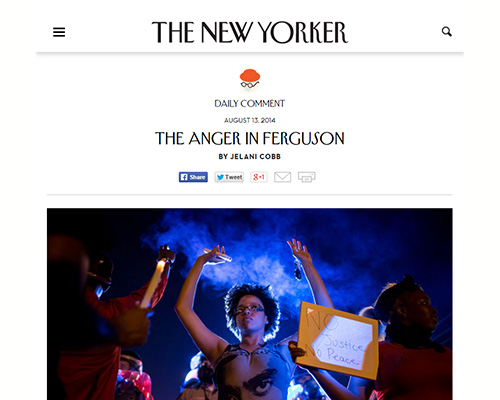 “The hazard of engaging with the history of race in the United States is the difficulty of distinguishing the past from the news of the day.” That was the mordantly ironic opening of one of Jelani Cobb’s first New Yorker dispatches on the events in Ferguson, Missouri.

No one has done a better job of placing those events—and similar happenings in other places like Sanford, Florida, Cleveland, Ohio and Staten Island, New York—in their broader context than Jelani Cobb.  Combining the strengths of an on-the-scene reporter, a public intellectual, a teacher, a vivid writer, a subtle moralist, and an accomplished professional historian, Cobb met the challenge of describing the turmoil in Ferguson in a way that cut through the frantic chaos of “breaking news” and deepened readers’ understanding of what they were seeing, hearing, and feeling. Ferguson was not an aberration, he showed, but a microcosm of race relations in the United States—organically connected to the complicated legacy of segregation and the unpaid debts of slavery itself. His work illustrates the truth of Faulkner’s famous insight that “The past is never dead. It’s not even past.”

Jelani Cobb’s writing exemplifies the virtues and values that the Opinion & Analysis category was created to celebrate.

Jelani Cobb is a contributor to The New Yorker and Associate Professor of History at the University of Connecticut. He also serves as Director of the Africana Studies Institute.  His books include The Substance of Hope: Barack Obama & the Paradox of Progress, The Devil & Dave Chappelle and Other Essays and To the Break of Dawn: A Freestyle on the Hip Hop Aesthetic. Born and raised in Queens, NY, he was educated at Jamaica High School, Howard University in Washington, D.C. and Rutgers University where he received his doctorate in American History in May 2003.