“Thousands of Kids Lost From Parents in U.S Deportation System”

Seth Freed Wessler is an investigative reporter and researcher who currently works at Colorlines.com and the Applied Research Center. Seth has reported from across the United States, Mexico and the Caribbean on immigration enforcement, the safety net, the human fallout of the financial collapse and criminal justice. Seth led a groundbreaking Colorlines/ARC investigation on the separation of families as a result of immigration and child welfare policy. The investigation led to direct response from the federal government, the introduction of state level legislation and to numerous advocacy campaigns. He was among the first reporters to write on the unprecedented build up of immigration enforcement under the Obama administration, and his Nation Institute Investigative Fund-supported reporting on the hidden effects of welfare reform for families struggling through the recession gained national attention. 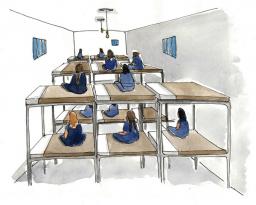 At least 5,000 U.S. citizen children are caught in the foster care system today due to the detainment or deportation of their undocumented immigrant parents by the U.S. government. This yearlong investigation exposed, for the first time, the scope of this problem and the stories of the families torn apart.

As Hillman judge Harold Meyerson put it, Wessler “asked and answered the most important question: what happens to these kids?”

Through Freedom of Information requests and interviews with detainees in far-flung facilities, Wessler uncovered entrenched policies that keep children far from parents for long periods of time, and sometimes indefinitely. Immigration and Customs Enforcement routinely jail parents who are not flight risks alongside hardened criminals. The agency does not transport immigrant parents to family court hearings, leaving them unable to participate in decisions about their children and sometimes leading to the termination of their parental rights.

Wessler found that the Obama administration deported more than 46,000 undocumented immigrant parents of U.S. citizen children in the first half of 2011. President Obama responded to Wessler’s investigation, calling it “a real problem” and vowing to improve efforts to keep families unified. However, if deportations continue apace, the number of children in foster care will surely skyrocket.