Gopher Resource touts their operation as “green manufacturing” because they recycle the lead in car batteries. But there’s nothing green about a plant so heavily covered in lead dust that workers emerge looking like they’ve been rolled in powdered sugar. Ambulances regularly collect workers who have been overcome by fumes.

Hundreds of Gopher workers were exposed to concentrations of lead hundreds of times above federal limits, which are far too lenient and haven’t been updated since the 1970s. No amount of lead is considered safe. Many workers likely died from their exposures, according to a group of experts consulted by the Times. Over the past five years, 14 current and former Gopher employees have suffered heart attacks or strokes, all before the age of 60. At least 16 children of plant workers also showed elevated lead levels, which were probably related to the plant.

An astonishing 80% of the Gopher workforce had enough lead in their blood to put them at increased risk of life-threatening conditions such as cardiovascular disease, high blood pressure, and kidney failure. The plant physician knew workers’ blood lead levels were so high they shouldn’t even have been allowed to go to work, but he never warned them.

Gopher knew about the excess lead levels, but they dismantled safety equipment. The company pushed the responsibility for low blood levels onto workers, offering bonuses for normal levels. This spurred workers to engage in all kinds of dubious methods to bring their lead levels down including secretly getting chelation therapy.

Federal OSHA inspectors hadn’t inspected the plant since 2014 and they overlooked critical shortcomings in earlier inspections. However, after the stories ran, OSHA was back at the plant for the first time in years.

“The reporting team went all out for this investigation, from knocking on workers’ doors to training to become certified lead inspectors,” said Sidney judge Lindsay Beyerstein. “They exposed shocking neglect by Gopher and deficient oversight by OSHA.”

The project was the result of an extensive investigation, including the blood analysis of lead levels in 500 workers and interviews with more than 80 current and former employees. The paper invested more than $500,000 in the project over a two year period with the support of Frontline’s Local Journalism Initiative.

Corey Johnson joined the Tampa Bay Times in early 2017 and is a reporter on the investigations team. His work has been a finalist for the Pulitzer Prize and won the prestigious Gold Medal from the Investigative Reporters and Editors, the Scripps Howard Award for Public Service, and the Gannett Foundation Award for Innovation in Watchdog Journalism.

Rebecca Woolington is a reporter on the investigations team at the Tampa Bay Times. She joined the Times in late 2018 after spending eight years working for The Oregonian in Portland. She is a native Portlander and graduate of the University of Oregon. She lives in St. Petersburg and mothers two cats, Caroline and Claudette.

Eli Murray is a data reporter at the Tampa Bay Times. He’s a self-taught programmer who uses code to create graphics and crunch numbers on statewide and national investigations. Eli grew up in rural Illinois and received an associate degree from Sauk Valley Community College before pursuing a bachelor’s in journalism at the University of Illinois. 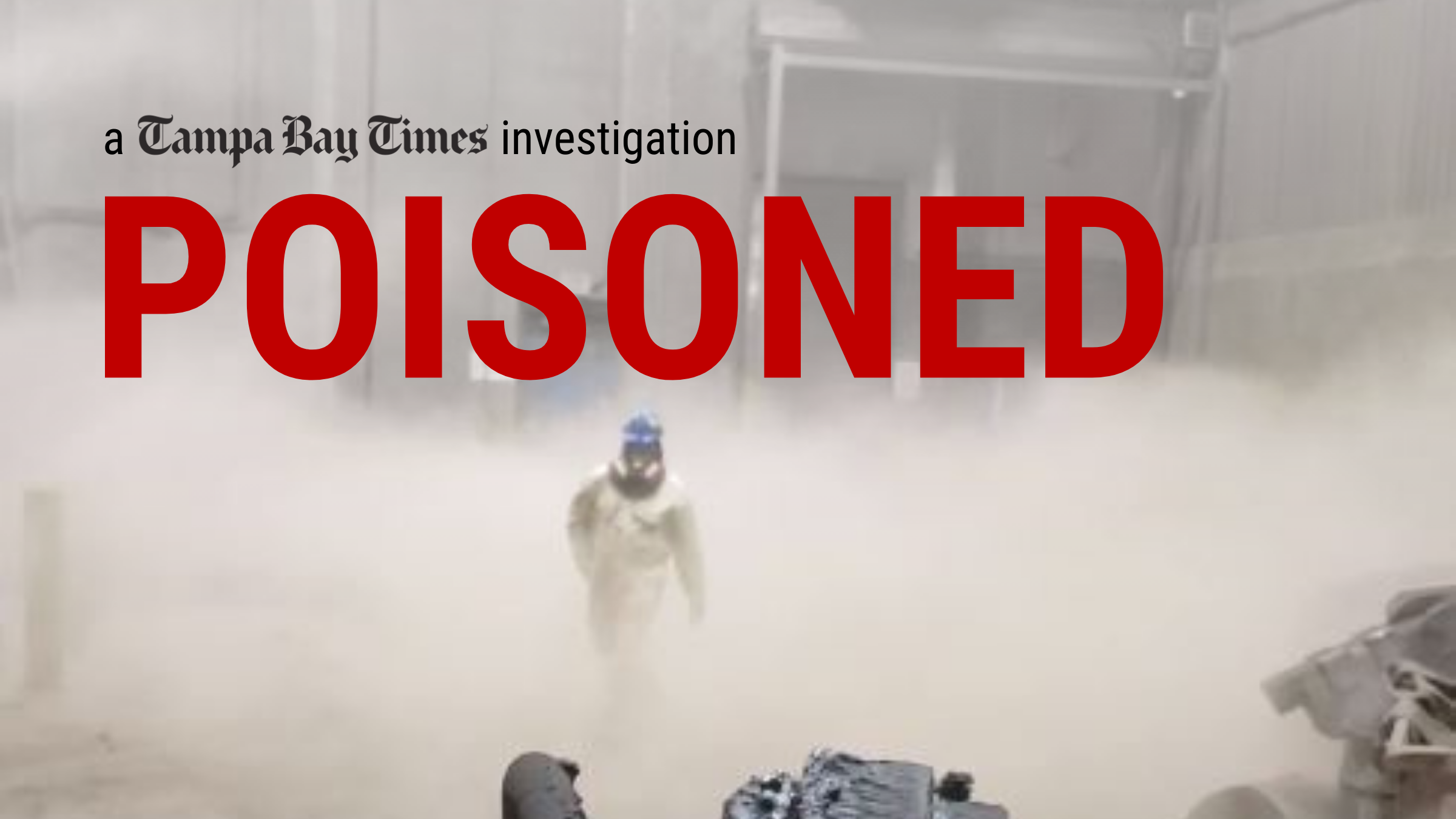 A worker inside Gopher Resource passes through a cloud of dust laced with the neurotoxin lead. The factory recycles 50,000 used car batteries a day.
Tampa Bay Times

Q: How did you find out about the lead threat at Gopher Resource?

A: The focus developed in 2019 while we were looking at lead problems in our local schools. A source gave us a 2014 state report that, among other things, pointed out the high rate of adult lead poisoning in the Tampa Bay area. The document also singled out battery recycling businesses as a source of the adult exposures. We then sought out to identify every recycling company we could. Rapidly, Gopher Resource emerged as the largest.

Q: I heard you trained to become certified lead inspectors for this story. What was that process like? And how did you apply that knowledge to your reporting?

A: The Times sent all three of us to Georgia to take an EPA certification course for lead inspectors and lead risk assessors. The inspector training taught us how to sample for lead in soil, dust and paint. It also taught us how to spot lead-based paint risks in homes. Both courses also covered material on the health risks of lead exposure and regulations from the Occupational Safety and Health Administration, the Environmental Protection Agency and the Department of Housing and Urban Development. All of this has been invaluable in helping us understand the risks and threats of lead exposure.

Q: What makes the Gopher plant such a dangerous source of lead?

A: The company recycles about 50,000 lead batteries a day. It runs around the clock. They break down these batteries, melt them down and reforge them into blocks of lead to resell. The business is inherently dangerous given the enormous amount of lead that is handled there. For decades, much of the factory’s lead work was done in spaces that were partially open, meaning that wind breezes could carry the lead dust and other poisons out of the structures and into a nearby community. When the company completed work on its new plant in 2012, it had fully enclosed the buildings. That made it extremely important to have a high-functioning ventilation system to ensure the poisons didn’t gather around the workforce. But the ventilation system hasn’t worked well for years. And the level of lead in the air actually increased inside the factory after the plant was enclosed.

Q: How did Gopher get away with exposing so many people to so much lead for so long?

A: Federal regulators hadn’t inspected the factory in the last five years, even though it was the only lead smelter operating in the state of Florida. It’s one of only 10 lead smelters in the United States. But OSHA hadn’t been there in a long time. Regulators are supposed to require that places like Gopher conduct regular testing and monitoring of the air and the amount of lead inside the bodies of its workers. But it doesn’t require that companies share that information with regulators or the public. OSHA is also supposed to inspect lead companies where workers have had blood-lead tests that register at least 25 micrograms per deciliter of blood. We know in our reporting that at least 450 times from 2014 to 2018, workers at Gopher tested at least that high. But not once did it prompt an OSHA inspection. Modern science has proven that those levels can cause serious health problems, including hypertension, kidney disease and cardiovascular disease.

Q: What kinds of reactions have you gotten from Gopher workers to the exposé?

A: We’ve heard from a lot of workers who are appreciative and thankful that we did this reporting. The series so far has also prompted others to come forward. Several told us that they felt heard for the first time. Others were shocked by the stories. Even though they worked there, they said they had no idea about the exposure levels or the suffering experienced by some of their colleagues, in part because they didn’t recognize the risks that the high levels of lead posed to their own health.

Q: What impact has your reporting had so far?

A: Two members of Congress called for an OSHA inspection and investigations from the Department of Justice and the Environmental Protection Agency. After a five year absence, OSHA spent all last week at the factory. We also know that Gopher has made a lot of fixes since we began asking questions. They said that all of the changes they’ve made have nothing to do with our investigation, but there has been a lot of activity in recent weeks. And as our stories got closer, and as we kept asking the company specific questions, more work got done. The mayor of Tampa and local county commissioners, meanwhile, have asked agencies to investigate. And several workers are hearing from various attorneys who want additional information for possible lawsuits.

Q: The Tampa Bay Times had some support from Frontline to report this story, can you tell us how that collaboration worked?

A: The collaboration came about through Frontline’s Local Journalism Initiative. After we had gathered some string and realized there was an important story to tell, we pitched it to Frontline. They liked the pitch and helped fund a significant portion of our reporting costs. They have been dream partners to work with. Any time you can collaborate with a news organization that has such an impeccable reputation, it’s always exciting and fruitful. But they’ve also just been incredibly supportive and encouraging. They’ve been part of this project every step of the way, helping to think through ideas and sharpen our framing. The partnership has been fantastic.

Q: What did you learn from this investigation that you will carry on to your next assignment?

A: This story underscored the importance of the human side, and the impact a story can have when you have humanity at the center of your investigative reporting. We talked to more than 80 current and former workers at Gopher. Many of them have had serious health issues. And being able to tell their stories and bring them to light really resonated and made the story more powerful. This may sound hokey but at the end of the day, this story was about talking to people most affected and listening to people who rarely get heard. Many of the people we spoke to were wary of journalists —  and any outsiders, for that matter. We were respectful of their time, their concerns and their life experiences, and I think that made a huge difference.