Workers at the massive Birmingham-area Amazon facility reached out to the Retail, Wholesale and Department Store Union (RWDSU). Thus began the second, and by far the largest union election in Amazon’s 25-year history. The workers were frustrated about working conditions, including workplace surveillance. Over 2000 of the facility’s 6000 workers signed cards supporting a union election. NLRB union ballots were mailed on February 8 and must be returned by March 29.

Gurley and Ongweso exposed Amazon’s glossy but misleading mailer full of “Vote No” instructions and the mysterious mailbox the company installed for workers to deposit their ballots. They revealed that Amazon launched an anti-union website full of misinformation. They clarified reports that Amazon was paying workers to quit before the election. They covered the political ramifications of the union struggle including President Joe Biden’s historic statement of support for the organizing workers and unions in general.

The winners’ work on the tech and labor beat brings deep context to their union election reporting by keeping tabs on Amazon’s history of workplace surveillance in the U.S and abroad, the company’s response to COVID, its treatment of pregnant workers in OK, its attempts to co-opt the Fight for Fifteen, and its decision to let customers donate a fraction of their purchases to a chapter of an armed insurrectionist group called the Oath Keepers.

“Gurley and Ongweso Jr. got on the Amazon beat early and provided essential coverage of this pivotal struggle,” said Sidney judge Lindsay Beyerstein.

Lauren Kaori Gurley is a senior staff writer at Motherboard, VICE’s tech website, where she covers labor and tech. Her work has also been published in The New Republic, the New York Review of Books, In These Times, and The American Prospect.

Edward Ongweso Jr is a staff writer at Motherboard, where he reports on technology and labor. He’s also the co-host of This Machine Kills, a podcast exploring the political economy of technology. 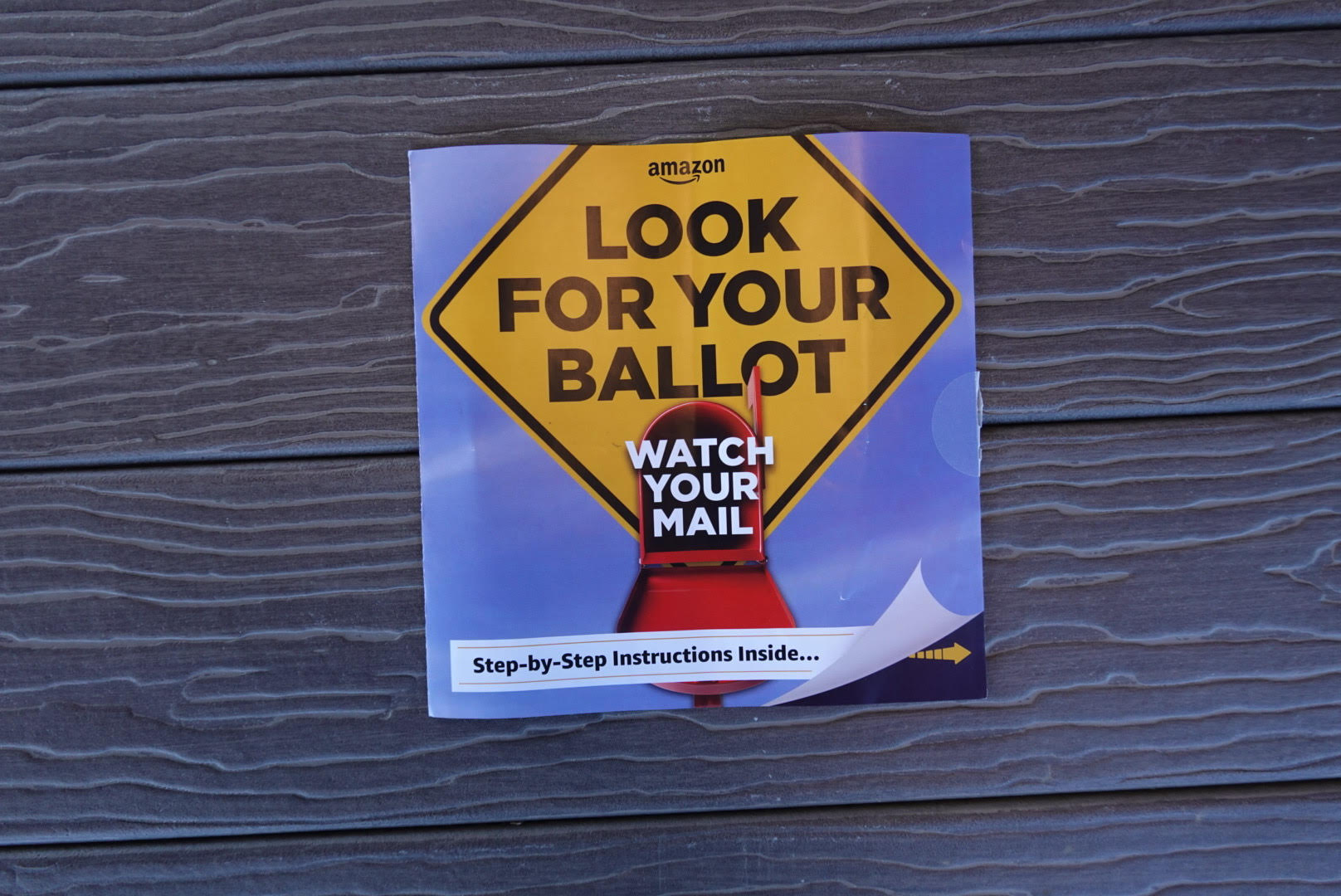 A mailer that Amazon sent its Bessemer, Alabama warehouse workers in late February with instructions for voting in the union election
Ben Bishop

Q: Take us back to when you first started covering the Amazon union drive in Bessemer. When did you start reporting on this? Did you expect the story to get this big?

A: It was pretty clear to us from the moment workers in Bessemer, Alabama went public with their union in October that this was going to be a national story. Our coverage of labor organizing at Amazon dates back to the summer of 2019 when we began reporting on nascent efforts to organize Amazon warehouses around the country. At the time, it was rare to see Amazon warehouse workers speaking out collectively against their employer. Since then, and especially during the pandemic, there’s been an meteoric uptick in Amazon workers staging walkouts and impromptu strikes, circulating petitions and protesting in response. These movements gained momentum as Amazon profited massively from the increased demand for online shopping during the pandemic while many of its workers have struggled to make ends meet and have seen their communities ravaged by the coronavirus.

The labor movement has long had its eyes on Amazon as a target for unionization. But we were surprised that the Retail, Warehouse, and Department Store Union (RWDSU) campaign to organize this warehouse moved so fast and far within a matter of months. Amazon had faced union drives at its warehouses before, but none had made it to the point of an election.

Q: Have either of you spent time on the ground in Bessemer? If so, what was that like? If not, can you walk us through your approach to covering the story remotely?

Lauren: I flew down to Birmingham in late February for four days to cover the union election, which began in early February and will end on March 29. (Bessemer is 20 minutes south of Birmingham.) During my stay, I drove all around the Birmingham area, interviewing workers and organizers at the RWDSU union hall, outside the warehouse, in their homes, and attended a rally where actor and activist Danny Glover held a press conference during a shift change. I had an incredible time seeing the organizing play out in real life after reporting for a year from my apartment.

There are definitely strong “vote yes” and “vote no” camps. The union hall stays busy with a constant stream of reporters, organizers, workers, and politicians stopping by to lend their support. Enthusiasm for the union can be felt throughout parts of Birmingham and Bessemer, where “Vote Union Yes!” signs are posted on sidewalks and highway on-ramps and exits.

Meanwhile, Amazon’s union-busting tactics seem to have had a palpable impact particularly on younger workers who are afraid of losing their jobs. Amazon has paid for billboards, glossy mailers, and TV ads that played on the local channels.

Edward: I haven’t been on the ground in Bessemer so I’ve relied on reports from the ground either through organizers or other reporters to see what’s going on and stay up to date on developments with changes in Amazon’s union-busting tactics.

Q: What are the main issues that Amazon workers hope to address if they are successful in their union drive?

They aren’t the typical concerns addressed by union contracts. Rather than bread-and-butter labor issues, like bargaining for wages and benefits (though that’s important too), Bessemer Amazon workers want a say in how the company uses cutting-edge technologies to control workers.

Q: How do the organizers reach out to Amazon workers to talk to them about the union?

A: The story behind the organizing of this union is pretty incredible. Because RWDSU organizers aren’t allowed on Amazon property, they’ve been using a small patch of public sidewalk near the stoplight outside the Amazon warehouse for months as their primary point of contact with workers.

This is where a good chunk of the 2000+ workers signed the union authorization cards needed to qualify for an NLRB election. Other pro-union warehouse workers approached their colleagues and signed cards in secret inside the warehouse.

Q: What has Amazon done to stop workers from organizing?

A: They’ve launched a full-blown union busting campaign. Amazon has sent anti-union mailers, care packages, and text messages to workers, telling them why a union could hurt their jobs. They’ve posted anti-union propaganda in bathroom stalls and throughout warehouses, passed out t-shirts and pins, and advertised on Twitch. In perhaps the boldest move, Amazon convinced Johnson County, where Bessemer is located, to change the traffic light outside the warehouse, giving organizers less time to talk to workers during shift changes.

Q: What would a union in Bessemer mean for Amazon as a whole?

A: The first union at an Amazon warehouse could mean a wave of organizing at Amazon warehouses across the United States, which could have a broader spillover effect across the warehouse industry and Amazon subsidiaries, such as Whole Foods. Seeing other workers organize and win tends to have a domino effect.

Q: There are a lot of workers agitating for some kind of workplace democracy at Amazon across the country, why is the Bessemer location the first major Amazon facility to make it to the NLRB election phase?

A: A few thoughts on this. Contrary to public perception of the South, Alabama (and Bessemer in particular) has a long history of militant unionism dating back to the 1930s and further. Today, Alabama has the highest union density of any state in the South. Often unionization struggles and the fight for civil rights have gone hand-in-hand. RWDSU, in particular, the union leading the Amazon drive, has close ties to the Black community in the area. Because of this history, Amazon’s Bessemer warehouse, which is 85 percent Black, is a logical place for the first union election at an Amazon warehouse.

Moreover, the pandemic has galvanized more Amazon warehouse workers to organize around the country than ever before. Workers have seen CEO Jeff Bezos earn $100 billion during the pandemic while Amazon has cut off $2 an hour hazard pay. This has pushed many workers to speak out for the first time.

Q: Of all the stories you’ve done on this historic election, which are you most proud of?

A: Probably our article on Amazon’s aggressive anti-union strategies during the voting period, which involved sending workers “Vote No” instructions and posting a USPS mailbox outside the entrance of the warehouse and texting Amazon workers to cast their ballots in it. We’re also working on a feature-length article which should be out very soon!

Q: Did anything funny or unusual happen during the course of reporting this story?

A: Stumbling upon Amazon’s union-busting website, Doitwithoutdues.com, which Amazon designed to convince workers to vote against the union, was a pretty wild experience. Parts of the original content have been removed, but there’s still a lot to take in with the caveat that this website features significant misinformation about how unions work.