The Sidney Hillman Foundation announced today that Seth Freed Wessler has won the July Sidney Award for “Fear, Illness and Death in ICE Detention: How a Protest Grew on the Inside,” an account of a desperate hunger strike and work stoppage at a private ICE detention facility in Georgia. His winning investigation is published by Type Investigations and the New York Times Magazine.

Coronavirus is ravaging correctional facilities of all kinds and ICE detention centers are no exception. As of late May, only 2600 ICE detainees had been tested for the virus, but more than half had tested positive. A number of detainees and at least two guards have died of the virus, system-wide.

Social distancing is impossible in cramped prison facilities, but the Trump administration refuses to release most older and medically vulnerable detainees due to the pandemic. Even before COVID-19, a report by the Department of Homeland Security’s inspector general found “egregious violations of detention standards,” including medical care, at ICE facilities.

Immigration and Customs Enforcement (ICE), which didn’t even exist before 9/11, has grown into a sprawling detention empire. Until the 1980s, people with pending immigration issues lived in the community awaiting the disposition of their cases. ICE detainees are not serving prison terms. Officially, they are only being detained to make sure they show up for their hearings. ICE has vast discretion to simply parole detainees.

In early April, inmates at the Irwin County Detention Center, a private facility in south Georgia operated by LaSalle Corrections, stopped eating and working. Their demands were simple: release elderly and high-risk detainees and protect the remaining detainees from COVID-19.

“Our lives have a lot of value, as mothers, fathers, children, grandparents, spouses, siblings,” the detainees said in a letter read aloud by a striker, “We are humans, and we have the right to live.”

Freed Wessler had an inside view of the strike because he’d been communicating with detainees via the prison’s video chat system since March.

“This investigation draws attention to the rampant neglect of ICE detainees,” said Sidney judge Lindsay Beyerstein. “It also highlights the courage and resourcefulness of the detainees in their efforts to organize and advocate for themselves.”

Seth Freed Wessler is an independent investigative reporter in New York and a fellow at Type Investigations. His reporting on law enforcement, detention and prisons and racial inequity has been awarded a Peabody Award, a Hillman Prize, the SPJ Sigma Delta Chi Award, awards from NABJ and from NAHJ, and numerous other journalism honors. Seth has reported for The New York Times Magazine, Mother Jones, Reveal, The Nation, This American Life and other outlets. 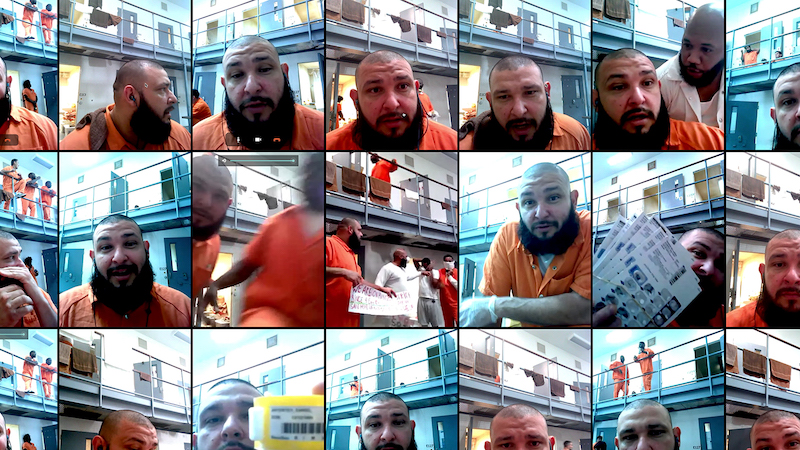 Q: Tell us about the video visitation system that you used to communicate with the people inside the facility?

A: Carceral facilities are built to isolate, to sever people inside from people outside. As a reporter focused on systems of punishment and incarceration, making contact with prisoners can be difficult, sometimes impossible, and always slow and circumscribed.

This case was different. Inside many ICE detention centers, private companies have set up video communication systems. Tablets attached to the walls in detention units stream video and audio directly to phones and computers on the outside. Using the web app, I could simply call my sources inside. They would answer and we would talk. To be sure, these video systems are extractive: I paid hundreds of dollars to a company called GettingOut to report this story. For relatives of some of the detained people I talked with, those fees can be prohibitive. But these video systems made it possible for me to achieve an incredible level of access. I would call my sources repeatedly, sometimes talking to a single person for hours in a single day. I could see and hear life happen inside. I watched guards enter and exit dorms, watched men and women walk laps around housing units to get exercise, listened as people prayed, sang and protested in the background. This is how I spent the first months of the pandemic: looking and talking through a portal into this ICE detention center in Georgia.

Q: Were authorities monitoring those calls?

It is a fair assumption when communicating with people in prison or detention that all correspondence is monitored, that nothing is secure. I make clear to my incarcerated sources that this is my assumption, and that therefore I know some things may go unsaid.

Even so, many of my sources decided that they wanted to speak openly. Nilson Barahona, the central subject of my story, told me that he was unwilling to lose his right to speak, even if it meant that he could be punished. Several of the women I spoke with were punished—placed in isolation cells–after one of their relatives recorded a video of the women holding up protest signs and then posted the video online.

Q: One of the leaders of the strike was interviewed on CNN Español, was this with the permission of authorities?

A: Nilson Barahona spoke with me and with the CNN reporter using the GettingOut app, the video call system. Reporters make these calls and conduct these interviews without going through facility officials, who in this case are employees of the private incarceration company Lasalle Corrections. In my years of reporting, I’ve never had luck getting permission to interview detained and incarcerated people through official requests, so I’ve stopped trying.

Q: Why are ICE detainees being held in the first place?

Mass immigration detention is a relatively new invention. Until a few decades ago, very few immigrants were locked up while their immigration cases were adjudicated. That changed as anti-immigrant politics took hold in the 1980s, and as racist logics of punishment that had driven the expansion of prisons in the U.S. spread to the immigration system. As I wrote in my story, “Immigration detention is an administrative hold, designed to ensure that people facing deportation don’t disappear. Because detained immigrants are held neither as consequence of being charged or convicted of a crime nor on orders of a judge, ICE has vast authority to simply release nearly everyone it holds — to grant detainees parole.” Especially in the pandemic, advocates have been arguing for the broad release of detained immigrants.

Nilson Barahona, who is 39 and lived most of his life in the U.S, after immigrating from Honduras, has diabetes and other medical issues that put him at risk if he’s infected with Covid-19.  His lawyer has asked for his release, but ICE has refused, citing criminal charges for a DUI. So Nilson has been separated from his young son and his wife, who have been cast into economic chaos since he’s been locked up.

Q: A number of public interest legal groups are litigating on behalf of ICE detainees. Is there an overarching strategy?

Legal advocates for detained immigrants and for detained and incarcerated people more broadly, have been engaged in an unprecedented campaign to free as many people as possible from lockup to protect them from COVID-19. Focusing first on medically vulnerable detainees and prisoners, lawyers have filed hundreds of legal actions, on behalf of groups and individuals. Many federal judges have acceded to these demands, ordering ICE and other agencies to release hundreds of sick or elderly detainees and prisoners. But in a set of cases, federal judges, especially in the South, have refused to even consider releasing immigrants from detention. Even after a detainee died from COVID-19 in a Georgia detention center, a federal judge refused for the second time to consider releasing vulnerable detainees, saying from the bench, “I have not heard anything terribly persuasive to change my mind.”

Q: Can you give us an update on what, if anything, has changed for the detainees since the story went to print?

Detainees who continue to call me have said that little has changed. New arrivals continue to be booked into the facilities, and guards continue to enter dorms. Detained people keep getting sick. As one man told me recently, “At some point I just know one of us will die.”

Q: Do you think the strike had an impact, despite the authorities not acceding to the striker’s demands?

A: It is hard to measure the success or failure of the protest inside the Irwin County Detention Center. It did not lead to widespread release, or to major changes in the operation of the facility. Protesters were punished, maligned and ignored, and detainees, as well as facility staff, continued to be infected with COVID-19. But the protest and others like it across the country did bring attention to the risks to ICE detainees, and forced the voices and faces of detained people into public view. After a set of protest videos were released online by detainees’ relatives, a local charity donated masks to the Irwin Detention Center, which were distributed inside.

Perhaps the most profound impact of the protests is the hardest to measure: the formation of a deep and sustaining sense of solidarity and shared struggle that grew among detained people organizing together. As Barahona told me when he showed me a protest letter that his unit received from another group of detainees: “They want to be certain that they are not alone. Nobody wants to be fighting by themselves.”