NEW YORK — Sarah Posner and David Neiwert of the Investigative Fund and Mother Jones win the November Sidney Award for their prescient and groundbreaking analysis of how Donald Trump’s presidential campaign brought hate groups into the mainstream of national politics.

Trump captured the imagination of white supremacists with his campaign promises to wall off the southern border, deport millions of undocumented immigrants, and abolish birthright citizenship. Trump also earned the loyalty of hate groups by retweeting racist memes and subsequently going to great lengths to avoid disavowing these groups when his high-tech dog-whistling got him into political trouble.
Last fall, Trump retweeted the false meme that 81 percent of white murder victims are killed by black assailants. The mainstream media debunked the meme and wrote off the incident as a gaffe, but “alt-right” fringe conservatives saw the retweet as proof that Trump was squarely on their side, and indeed, Trump never retracted it.
Other than former Klansman David Duke, Trump has not disavowed a single endorsement from the dozens of neo-Nazis, Klansmen, white nationalists, and militia supporters who have backed him.
Extremists’ enthusiasm for Trump reached a fever pitch in August when the campaign hired Stephen Bannon, the former publisher of Breitbart News and a major “alt-right” voice. One of Trump’s first acts as president elect was to appoint Bannon as his top strategic advisor, making the former Goldman Sachs banker one of the most powerful people in the country.
In early 2016, reporters caught white nationalists running robocalls telling GOP primary voters: “Don’t vote for the Cuban, vote for Donald Trump,” and asserting that “the white race is dying out in America and Europe because we are afraid to be called ‘racist.’”
For four days, Trump weathered the storm, refusing to denounce the calls. CNN’s Erin Burnett finally extracted a grudging disavowal from the candidate, but he continued to insist he understood why the white nationalists were angry.
William Johnson was forced to step down as a delegate for Trump after Mother Jones exposed him as the leader of the white nationalist American Freedom Party, but Johnson still went on to buy campaign ads for Trump in seven states.
The Trump campaign credentialed James Edwards, the host of The Political Cesspool, a show dubbed racist and anti-semitic by the Southern Poverty Law Center. Edwards was allowed to broadcast from a Trump rally, and interview Donald Trump, Jr., and he somehow secured credentials to cover the Republican National Convention.
Some white nationalists hopefully predicted, in the weeks before the election, that Trump’s success would spark a wave of grassroots political activism. White nationalist Jared Taylor said, “I feel my job will be done when at the PTA meeting a woman gets up and says, ‘Well of course there aren’t as many blacks in the AP courses, because they just do not have the same average IQ,’ and nobody objects.”
“Mother Jones warned that Trump’s win would bring hate groups into the open and normalize their views,” said Sidney judge Lindsay Beyerstein. “With the surge of hate crimes reported in the wake of Trump’s election, it seems like their prediction is coming true.”
Sarah Posner is an investigative journalist whose coverage of politics and religion has appeared in the New York Times, Washington Post, Rolling Stone, Mother Jones, and many other publications.
David Neiwert is an investigative journalist based in Seattle and the Pacific Northwest correspondent for the Southern Poverty Law Center, as well as the author of numerous books. 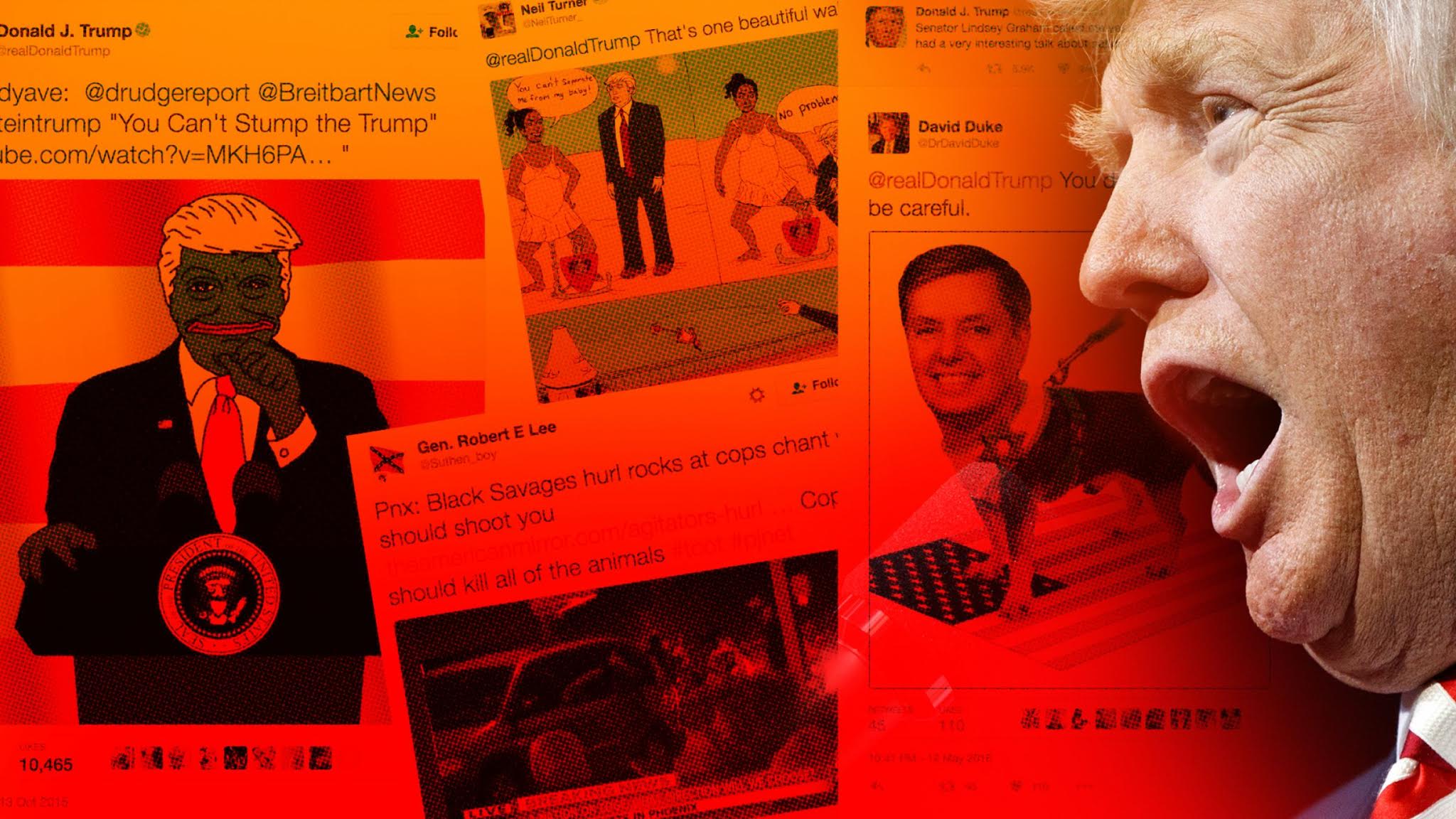 Q: Who are you talking about when you talk about hate groups?

A: The individuals and organizations backing Trump include a range of extremist right-wing ideologies, primarily the collection of white nationalist ideologies—white supremacists, neo-Nazis, neo-Confederates, paleo-libertarians, and a range of anti-Muslim and nativist forces—we now know as the alt-right. This includes organizations with anodyne names like the National Policy Institute and American Renaissance, both of which are at the forefront of an alt-right movement seeking to expand their reach and gain a foothold in Washington in the wake of Trump’s election. They also include so-called Patriots and constitutionalists, including many of those associated with the Bundy family’s armed standoffs in Nevada and Oregon.

Q: What aspects of Trump’s policy platform appeal to hate groups above and beyond that of a typical GOP presidential candidate?

A: By far it was Trump’s immigration stance that energized this constituency. For some, his call to build the wall in his June 2015 announcement of his candidacy was enough to draw their admiration. But many withheld an endorsement until he released his formal immigration proposal two months later, in which he called for eliminating birthright citizenship and deporting large numbers of undocumented immigrants. His ardent alt-right supporters saw this as evidence that he understood their fear of what they call “dispossession,” even “genocide” of white people owing to immigration, multiculturalism, and diversity.

Q: What was the role of social media in bringing the Trump campaign and hate groups together?

A: We all know that Twitter was Trump’s favored communications method, both to insult his political opponents and the press, and to lavish praise on himself and his supporters. We documented how his Twitter habits helped promote the memes developed by the alt right. This included his retweet of a tweet from an account whose handle is @WhiteGenocideTM, as well as his retweet of doctored crime statistics claiming that African-Americans perpetrate the vast majority of crime, of an anti-Semitic meme depicting “corrupt” Hillary Clinton surrounded by a pile of cash and a Star of David, and of himself as alt right mascot Pepe the Frog. Significantly, Trump mostly declined to remove those tweets from his account when their racist and anti-Semitic content was raised by the press.
For Trump’s alt-right fans, these retweets were important signs that he had been “red-pilled,” a reference to The Matrix meaning that his eyes were now opened to their alt right “reality.”
Q: You analyzed Trump’s hate footprint on twitter. Can you give us a brief synopsis of what your study set out to measure, how you measured it, and what you found?
A: After consulting with the SPLC to identify hashtags and key phrases used on social media by these particular groups, we used Little Bird software to determine who the “influencers” were in this world on Twitter, whether Trump was followed more by accounts that promoted white nationalist or alt-right memes and ideas than the other major party candidates (Hillary Clinton, Bernie Sanders, and Ted Cruz), and whether his staffers and surrogates followed these accounts.
We found that while anti-abortion extremists were almost as likely to follow Ted Cruz as Donald Trump, there was a yawning divide when it came to the alt right. Anti-Muslim, anti-immigrant, white nationalist, neo-Nazi and Patriot movement influencers were far more likely to follow Trump over his rivals. For example, among the influencers using the #BanIslam hashtag, 84 percent followed Trump, while only 23 percent followed Cruz and 12 percent Clinton. We also found that more than two dozen of Trump’s surrogates and staffers were following five or more of the top extremist influencers.
Q: Social media aside, what are some actions the Trump campaign took to give access and legitimacy to members of hate groups?
A: Above all, it was Trump’s response when he was questioned about his embrace by these extremists, whether it was his endorsement by David Duke and other Klansmen, the robocalls conducted on his behalf by white nationalists, or his retweet of the fake crime stats. When queried on Fox or CNN, he would dance around the issue, express his sympathy with the anger of his followers, and, at most, follow up by issuing an anodyne “disavowal.” On the alt-right, this behavior was interpreted as a nod of encouragement. Likewise, Trump’s response to the threatening and sometimes violent behavior of some of his supporters: He would briefly note that the behavior was “bad” and then proceed to excuse the matter by saying that his supporters were “passionate” and “angry.” This too was interpreted on the far right as a kind of sly encouragement.
Q: Who is Steve Bannon and why is it notable that he has been appointed to the post of chief strategist in the Trump administration?
A: Steve Bannon is the former chair of Breitbart News, which he described to us at the Republican National Convention as “the platform for the alt right.” About a month after he first spoke to us, Trump tapped him to be his campaign CEO; he is now set to become Trump’s chief White House strategist. Under Bannon, Breitbart peddled in conspiracy theories, Islamophobia, racism, misogyny, and anti-Semitism, providing a platform for white nationalist ideas. As the Southern Poverty Law Center has put it, Bannon “was the main driver behind Breitbart becoming a white ethno-nationalist propaganda mill.” Now that he has been tapped for a top White House job, Bannon has found defenders even outside of Trump’s inner circle.
Sarah Posner
David Neiwert