NEW YORK: The Hillman Foundation announced today that David Barstow has won the February Sidney award for “Tea Party Lights Fuse for Rebellion on Right,” his searing portrait of the Tea Party movement in The New York Times. The story details how the pressures from a severe recession have melded with propaganda repeated by Glenn Beck and other right-wing broadcasters to produce broad fears of an imagined plan by the federal government to seize guns and suspend basic liberties.

Sidney Award judge Charles Kaiser said, “Barstow’s story links the Tea Party movement with militia groups, anti-immigration advocates and those who favor the abolition of the Federal Reserve. It is a thorough and balanced account of the disparate forces which are feeding the growth of this volatile movement across America, written by one of America’s premier investigative reporters. While there has been a considerable amount of coverage on the Tea Party movement, Barstow’s piece was the most sophisticated one.”

Barstow, 47, shared a 2004 Hillman prize with Lowell Bergman for a series of stories examining the safety and environmental records of McWane Inc., one of the world’s leading manufacturers of cast-iron pipes. The articles chronicled the dangerous work conditions, violations of environmental regulations, and obstruction of federal workplace investigations that were commonplace at McWane plants around the country.

Last year Barstow won the Pulitzer Prize for investigative reporting for two stories that exposed a covert Pentagon campaign to use retired military officers as analysts for television and radio networks, to reiterate administration “talking points” about the wars in Iraq and Afghanistan. Barstow also received the 2008 Sigma Delta Chi Award for Washington Correspondence for the series, as well as the George Polk National Reporting award. (Hillman’s Charles Kaiser discussed those stories and the networks’ failure to acknowledge or react to them with Bob Garfield for a segment of “On the Media.”)

Barstow joined the staff of the Times in 1999, and became a full-time investigative reporter in 2002. Before he worked for the Times, Barstow spent nine years at The St. Petersburg Times, where he was a three-time finalist for the Pulitzer Prize. He grew up in Concord, Mass., and received a B.S. degree from Northwestern University in 1986.

The Sidney Award is given once a month to an outstanding piece of socially-conscious journalism by the Sidney Hillman Foundation, which also awards the annual Hillman Prizes every spring. Winners of the Sidney receive $500, a certificate designed by New Yorker cartoonist Edward Sorel, and a bottle of union made wine. 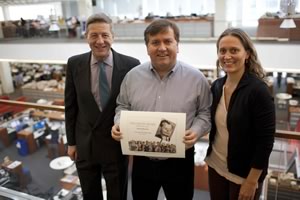 1. Why did you decide to look into the Tea Party Movement?

When the Tea Party movement exploded last summer, it became clear to me and my editors that we needed to take a deep look at this phenomenon and its ideology, members, organization and goals. I set out to do this last fall, travelling the country and attending Tea Party rallies in more than a dozen states.

The story seemed to touch a nerve. We had more than 1,500 written responses from readers to the piece in less than 24 hours. It quickly exploded in the blogosphere, touching off passionate debate at both ends of the political spectrum. Clearly many Americans are struggling to make sense of the Tea Party movement and its potential implications for our politics.

4. If you went back to this story in another year, what would you want to follow-up on?

This is an interesting question. I would be looking for several things in the next year. First is the question of how the Tea Party movement resolves its relationship with the Republican Party. Will it be absorbed by the GOP, or will it retain its independence? If Tea Party candidates emerge in Republican primaries, how will they fare? To what extent will Tea Party supporters back third party candidates? There are two other big questions ahead. The first is which politician captures the energy of the Tea Party movement heading into 2012. The second is the extent to which the Tea Party reshapes policy and government in Washington.