NEW YORK: The Hillman Foundation announced today that CNN’s Anderson Cooper has won the January Sidney Award for his network’s unrivaled coverage of the devastation following the recent earthquake in Haiti. Together with his producer, Charlie Moore, and his cameraman, Neil Hallsworth, Cooper did a splendid job of chronicling the painful details of daily life in the aftermath of the quake.

The CNN anchor arrived in Haiti the day after the earthquake. He stayed there for more than two weeks and then returned again on February 7th. As reported by the Pew Research Center’s Project for Excellence in Journalism, CNN aired almost three times as many stories originating from inside Haiti than Fox and MSNBC combined.

Sidney Award judge Charles Kaiser said, “Whether he was pointing out the critical shortage of medicine, or the absence of any organized system to take care of the newly-orphaned, Cooper and the rest of the CNN team set the standard for coverage which was both detailed and empathetic.”

Some of Cooper’s best stories out of Haiti can be viewed here, here, and here.

Cooper is the anchor of CNN’s evening newscast, “Anderson Cooper 360°,” as well as a contributor to CBS’s “60 Minutes.” He previously garnered wide praise for his coverage of Hurricane Katrina in New Orleans in the summer of 2005. He is the author of Dispatches from the Edge, a memoir about covering the South Asia tsunami and Hurricane Katrina, among other major news stories.

Before joining CNN in 2001, Cooper was a correspondent for ABC News, where he anchored the network’s live, interactive program, “World News Now.” Before that he was chief international correspondent for Channel One News, whose broadcasts are seen in more than 12,000 American classrooms.

The Sidney Award is given once a month to an outstanding piece of socially-conscious journalism by the Sidney Hillman Foundation, which also awards the annual Hillman Prizes every spring. Winners of the Sidney receive $500, a certificate designed by New Yorker cartoonist Edward Sorel, and a bottle of union made wine. Nominations can be submitted here. 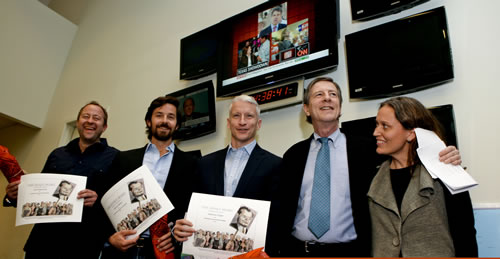 1. Why have you committed yourself  to this story of human tragedy and government failure with so much more energy than most of the rest of American media?

I think all of us still covering this story wish there were more reporters from other networks still on the ground. Thankfully, CNN is committed to reporting on what is still unfolding. My producer, Charlie Moore, my cameraman, Neil Hallsworth and I, and all the other CNN teams in Haiti, feel that what the Haitian people continue to face everyday is extraordinary, and the least we can do is to bear witness to their struggle. Unless the world continues to pay attention to what is happening in Haiti, there is a good chance that the needs of the Haitian people will once again be forgotten.

2. What has been the response to your work?

The response among Haitians and Haitian-Americans has been very positive. I think they want the story told, and appreciate the lengths to which we have gone to do that.

3. What should Americans know?

That the tragedy is ongoing. There is a lot more happening in Haiti than the 10 American missionaries in jail. Hundreds of thousands are homeless sleeping on the streets or in parks. People are hungry, and schools are closed, and the Haitian government has shown little ability to meet the needs of its people.

4. Do you see any hope for fundamental change for Haiti through the recovery process?

I don’t think it is my job to be hopeful or to be pessimistic. I just try to report what I see. I can tell you most of the Haitians I’ve talked to want more from their own government, and I do think unless there is strong leadership on the ground in Haiti, it will be very difficult to truly bring about lasting change.