Craig Whitlock of the Washington Post wins the January Sidney for ‘The Afghanistan Papers,’ the unvarnished history of the war in Afghanistan, as told by the U.S. officials who waged it.

For nearly twenty years, U.S. officials told the public that they were making progress in Afghanistan, but they weren’t.

The proof comes from the U.S. government’s own reports on the root causes of failure in Afghanistan, compiled by an agency known as SIGAR, and obtained by the Post under the Freedom of Information Act (FOIA) after a three-year legal battle.

The Post published these documents, some 2,000 pages of discussions with over four hundred insiders, including generals, diplomats, aid workers, and Afghan officials.

The insiders admitted that the U.S. had no clear mission, negligible understanding of Afghan culture, and inadequate safeguards against fraud. One contractor said he was tasked with spending $3 million in aid per day in one county-sized region. This influx of funds fuelled uncontrollable corruption.

Adjusted for inflation, the U.S. has spent more money to develop Afghanistan than it did to rebuild Western Europe after the Second World War, but we have nothing to show for it.

The head of the federal agency that conducted the interviews admitted to The Post that the documents show “the American people have constantly been lied to.”

“The Afghanistan Papers is an astonishing record of deception by three presidents,” said Sidney judge Lindsay Beyerstein. “This investigation is proof that the U.S. government has repeatedly broken faith with the public on matters of war and peace. It should challenge us all to demand evidence and accountability from our leaders.”

So far, the war in Afghanistan has claimed the lives of 2,300 American troops and more than 31,000 Afghan civilians and cost over a trillion dollars.

Craig Whitlock has been a reporter for The Washington Post since 1998 and is assigned to the Investigative Desk, where he specializes in national security. Previously, he covered the Pentagon beat and served on the Foreign Desk as The Post’s Berlin bureau chief, where his primary assignment was investigative reporting into terrorism networks and counterterrorism policy in Europe, North Africa, the Middle East and South Asia. He has reported from more than 60 countries. 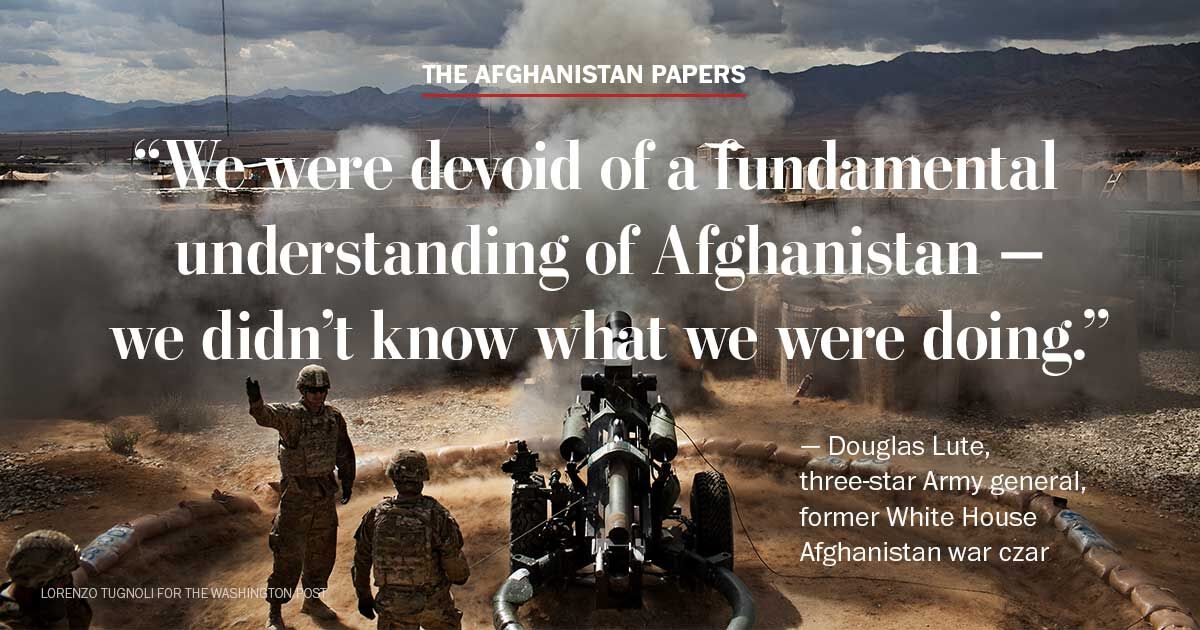 Q: What prompted you to investigate this story?

A: In August 2016, The Post received a tip that retired Army Lt. Gen. Michael Flynn had given a lengthy unpublished interview to an obscure government agency in which he gave a blistering assessment of the war in Afghanistan. At the time, Flynn was gaining public attention for his campaign support of Donald Trump – and for his “lock her up” chants about Hillary Clinton. Flynn had served in Afghanistan as the chief of military intelligence and had just retired as the head of the Defense Intelligence Agency. He also had a reputation for speaking his mind. We were curious what he had to say about the longest armed conflict in American history and it seemed like something the public ought to know.

Q: Walk us through the bureaucratic and legal battles that you went through to get these documents and your ongoing efforts to get more documents.

A: On Aug. 24, 2016, The Post filed a Freedom of Information Act (FOIA) request with the Special Inspector General for Afghanistan Reconstruction (SIGAR)– the agency which had conducted the interview with Flynn – for a transcript, recordings and other documents from the Flynn interview. At first, SIGAR staffers were helpful and indicated the records might be released in a few weeks.

That all changed after Nov. 8, 2016, when Trump won the presidential election. SIGAR dragged out its response to The Post’s FOIA request and finally issued a blanket denial for the Flynn records on Jan. 25, 2017 – the day after Flynn was hired by Trump to serve as his national security adviser.

The second FOIA lawsuit still isn’t over. The Post has asked a federal judge to order SIGAR to identify the names of about 300 of the 400 people it interviewed for the Afghanistan Papers and to disclose other material it has redacted or withheld. A decision is pending.

Q: What are some of the clearest examples you found of U.S officials willfully deceiving the American public? Many U.S. officials acknowledged in their interviews that the U.S. military and the State Department routinely made rosy pronouncements in public about the state of the war that they knew were false or distorted.

Perhaps the most vivid and distressing example came in an interview with someone who served in the Obama White House with the National Security Council. This person bluntly admitted there was constant pressure to produce figures for public consumption that would show the troop surge of 2009 to 2011 was working, despite hard evidence to the contrary. Moreover, the NSC official said this effort to “spin” the lack of progress was hatched at the White House itself.

“It was impossible to create good metrics. We tried using troop numbers trained, violence levels, control of territory and none of it painted an accurate picture,” the NSC official said. “The metrics were always manipulated for the duration of the war…And this went on and on for two reasons: to make everyone look good, and to make it look like the troops and resources were having the kind of effect where removing them would cause the country to deteriorate.”

We still don’t know the identity of the NSC official who said this. SIGAR redacted the person’s name from the documents we received under FOIA. We are hopeful the judge will order SIGAR to finally identify the person who admitted that the Obama White House was deliberately deceiving the public.

Q: Given all that the Afghanistan Papers has revealed, can we justify continuing to keep troops in Afghanistan and even deploy more troops there?

A: I’m a news reporter for The Washington Post, not an advocate. People can read our series and make up their own minds about whether they think it is warranted to keep U.S. troops in Afghanistan.

Q: The government agency that compiled the reports (SIGAR) has been providing quarterly reports to members of Congress on Afghanistan. Does this mean that some (or all) members of Congress have known all these damning details for years and not spoken out about them?

A: As we made clear in our series, SIGAR has published several “Lessons Learned” reports based on hundreds of interviews the agency conducted with participants in the war. Those reports certainly highlight a number of problems – corruption, runaway opium production in Afghanistan, poorly trained Afghan security forces. But we found SIGAR sanitized its findings and omitted the most “damning” quotes, as you put it, that people had uttered in the interviews. All the generals and ambassadors who said the U.S. government had no idea what it was doing in Afghanistan, that the war strategy was a disaster, that they didn’t even understand what the objectives were – all of those inflammatory comments were left out by SIGAR. There’s no reason to think Congress was aware of them.

Q: What lessons do the The Afghanistan Papers hold for officials and citizens who are contemplating war with Iran?

A: It is a lot easier to start a war than it is to end one. I’ll leave it at that.