Dan Savage Wins September Sidney for "It Gets Better" Project

NEW YORK: The Sidney Hillman Foundation announced today that Dan Savage has won the September Sidney Award for his “It Gets Better” Project, an online video archive designed to give hope to high school students who are being bullied because they are perceived to be lesbian or gay. Savage began the project in September in response to the recent rash of suicides by gay teenagers around the US.

Savage said he decided to start the project after 15-year-old Justin Aaberg of Minnesota and 15-year-old Billy Lucas of Indiana both hung themselves after severe harassment in school.Following the suicides, Savage wanted to figure out a way to reach out to teenagers dealing with similar types of harassment, to let them know “it gets better”–and then he realized that he could do exactly that, through the Internet.

Savage said his project was especially aimed at students attending high school in small towns across America–places that would never consider inviting an openly-gay person to address the school on the subject of what it is like to be gay.

The first video Savage posted was one he made with his husband Terry; which, after a month on Youtube, has nearly 900,000 views. In it Savage says that if his adult self could have spoken to his 14 year-old self, “I would have told me to really believe the lyrics of ‘Somewhere’ from “West Side Story”–“There’s a place for us.”  His husband Terry says, “Living well is the best revenge–and if you can live through high school–and you definitely can–you’re going to have a great life,  and you’re going to be the envy of all those people.”  Hundreds of gay and lesbian citizens have posted videos, including well-known people like the singer-songwriter Jewel, and Rich Tafel, the former executive director of the Log Cabin Republicans.

Sidney Award judge Charles Kaiser said, “Savage used a national crisis to begin an inspirational project, which has brought hope to young gay, lesbian and transgendered people everywhere–not only in America but all around the world.”

After Savage was notified that he had won the Sidney, he said, “Thank you for recognizing that, at its heart, the IGBP is a piece of advocacy journalism.” Savage asked that his $500 prize from the foundation be given to The Trevor Project, whose mission is to end suicide among LGBTQ youth by providing life-saving and life-affirming resources, including  a 24/7 crisis intervention lifeline.

Dan Savage has been writing “Savage Love,” an internationally syndicated sex advice column, since 1991. His column originates in The Stranger, and appears in The Village Voice, The Chicago Reader and many other weekly newspapers. Savage’s writing has also appeared on the op-ed pages of the New York Times, in Forbes, on Salon, and in numerous other publications. In addition to his regular appearances on CNN, MSNBC, and “The Colbert Report,” Savage is also a regular contributor to public radio’s “This American Life.” He is the author of four books: “Savage Love” (Plume 1998); “The Kid: What Happened When My Boyfriend and I Decided to Get Pregnant” (Dutton, 1999); “Skipping Towards Gomorrah: The Seven Deadly Sins and the Pursuit of Happiness in America” (Dutton, 2002), and “The Commitment: Love, Sex, Marriage and My Family” (Dutton 2005).

For an interview with Savage about his project, click here. 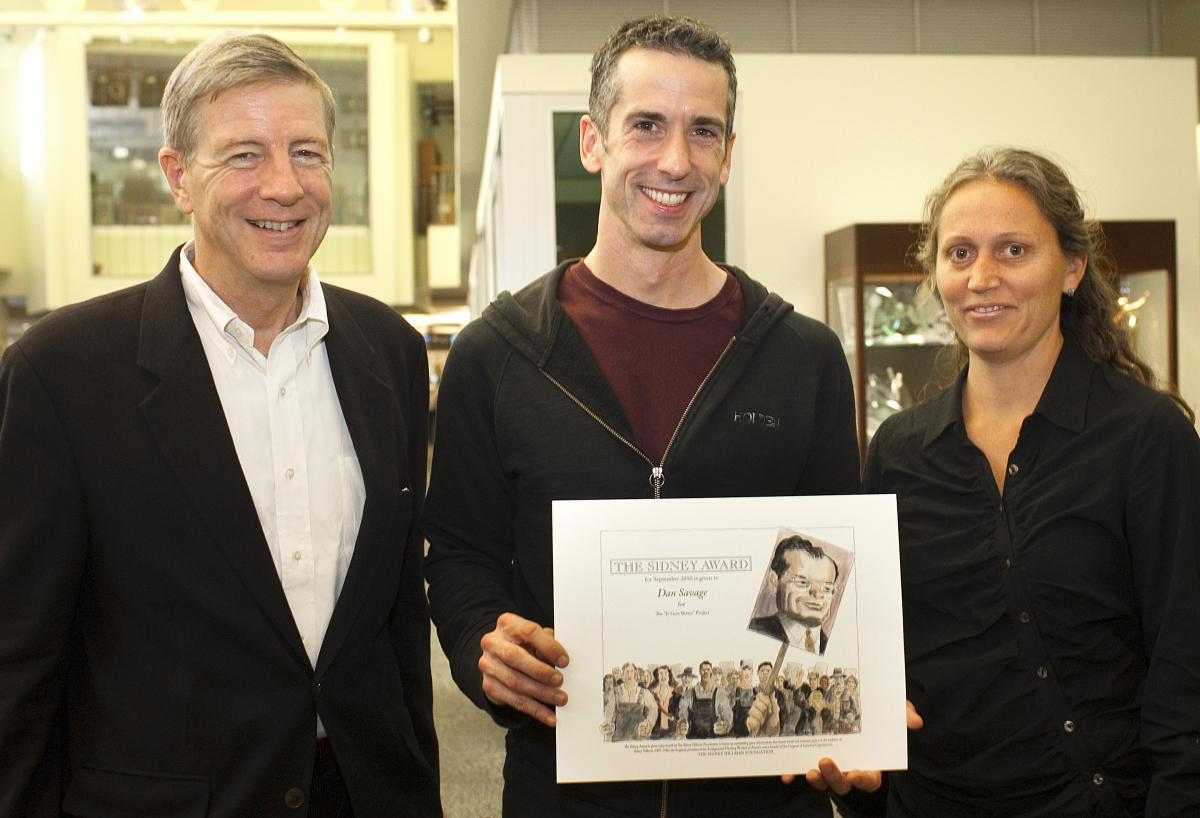 Dan Savage discusses his It Gets Better Project, created to give hope to LGBT high school students.

1. Why did you decide to start the It Gets Better Project?

But we’re not allowed, as gay adults, to talk to these kids. We would never get permission, or an invitation. Their parents, preachers, and teachers don’t want gay adults reaching out to gay kids to give them messages of hope or share coping skills or to prove that what they’ve been told about being gay is a lie by showing them what of our lives are like now.

And then I realized that I was waiting for permission that I didn’t need anymore—in the YouTube era, I could, into a video camera, talk to gay kids who are being bullied, and give them hope, advice, coping strategies, and share my life with them.

2. What has the response been since you started the project?

We’re completely overwhelmed—in every sense of the word. We haven’t been able to keep up with the pace of submissions. We want to review every video before we post it, and there are so many that we literally can’t keep up. It’s also been emotionally overwhelming. Some of the stories are heartbreaking.

3. What surprised you about the response, or in setting up the project?

I guess I’m surprised that someone didn’t think of this sooner—clearly I wasn’t the only gay person out there thinking, “I wish I could’ve told him—Billy, Justin, Seth, Asher—that it gets better.” A lot of LGBT people were feeling that way, but not reaching out because no one had extended an invitation or given them permission to talk to these kids. Until we launched the IGBP and essentially gave ourselves permission to reach out to these kids whether their preachers, teachers, and parents like it or not.

4. What impact do you hope the project will have within a year’s time?

Well, in a year’s time, in ten year’s time, all the videos will still be online, and still accessible to kids who need to hear their messages of hope, or learn what they can do to cope from people who’ve been there, or find out about how they can make it better in their schools right now. Unlike red ribbons, which are now moldering in dresser drawers and landfills, the videos will continue to do exactly what they’re designed to do even after their “moment” has passed. People will move on to other causes, other issues that we need to raise awareness about, but the videos will still be there, still useful, still accessible.

5. What aspect of the project do you see yourself pushing further?

We want to make it a fundraising engine—not for us. YouTube is free. But for things like The Trevor Project and perhaps the ACLU, which does amazing work defending the rights of LGBT high school students.