Amazon, the nation’s largest retailer, has been making its warehouse workers sign strict and sweeping “non-competition agreements” that prohibit them from working similar jobs anywhere in the world for 18 months, often after only three months of Amazon employment.

One seasonal worker told Woodman that, under the terms of her contract, she would have to ask Amazon’s permission in order to get a job with a nearby Sam’s Club in the off season.

“I’d send Amazon a thing and say: ‘I applied at Sam’s Club. How do you feel?’” she said. “Then it would be up to Sam’s Club to hire me and up to Amazon to say yes or no.”

Workers must pledge not to “directly or indirectly” support any good or service that competes with Amazon. Permanent workers were also made to sign non-competition agreements in order to get severance pay, Woodman found.

Since Amazon sells everything from groceries to software, these sweeping noncompete agreements effectively shut workers out of working in large swathes of the world economy for over a year.

“We hope that this award keeps the pressure on Amazon to follow through on its promise to drop the clause for hourly workers,” said Sidney judge Lindsay Beyerstein.

Spencer Woodman is a freelance journalist based in New York. His work has been published by the Guardian, the Nation, Slate, and Vice Magazine, and supported by the Investigative Fund of the Nation Institute. 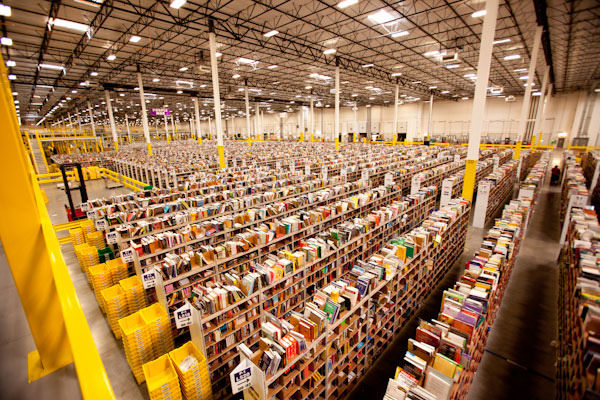 A: Amazon’s motivations for this are unclear, and the company did not answer my inquiry seeking an explanation.Defenders of noncompete contracts will generally point to the importance of companies being able to retain trade secrets and ensuring that their investments in training employees are worthwhile. This rationale may carry a bit less force in a situation where temporary warehouse workers are the ones signing the contracts.

The more cynical potential explanation for the existence of these contracts would be that a company is simply seeking to deprive its competitors of workers to hire. In this view, it’s a way for companies to get a competitive advantage at almost no cost, although it might seriously cost the employees who sign the agreements.

But, again, any talk of Amazon’s motive for pushing this contract on hourly and temporary workers is still speculation. Amazon did not reply in any manner to my four emails and two voicemails seeking comment for this story. The only thing I’ve heard from Amazon in regard to the piece is what the company told the Guardian when it announced that it would be eliminating the non-compete requirement for hourly workers.

A: The agreement states that, for 18 months after leaving Amazon, employees cannot work a job where they support any good or service they had helped to support at Amazon. Among other things, it also requires the employee to present the full agreement to all future prospective employers before accepting a new job.

Q: Is this legal?

A: It is legal to ask an employee to sign a non-compete agreement. Yet whether these contracts are legally enforceable is another question. There are states like California and North Dakota where courts will likely toss such agreements, especially in the case of low wage and temporary warehouse workers. But there are other states like Florida, Georgia, and Texas where courts are more willing to enforce noncompete contracts with less regard for how reasonable they might be. And there is precedent for non-competes actually being enforced against low wage workers. Last year, Steven Greenhouse wrote an excellent piece for the New York Times that told the story of a hairdresser in Massachusetts that had a non-compete successfully enforced against him by a barbershop where he used to work.

Q: Is Amazon the only company requiring non-compete agreements from temporary, blue-collar workers?

A: Other companies have been called out for requiring non-competes of low-wage workers. In October, Dave Jamieson at the Huffington Post reported that the sandwich chain, Jimmy John’s, was having its workers sign non-compete agreements. That contract applied to employees for two years after leaving Jimmy John’s and included any business deriving more than 10 percent of revenue from sandwich sales. A few of those workers have sued Jimmy John’s, citing the agreement’s “oppressive” effects.

Yet given Amazon’s size and influence — not to mention the fact that these contracts were being pushed on its temporary workers — the Amazon contract does appear to be a bit more extreme than the previous examples of what we’ve seen.

Q: How did you become aware of the non-compete requirement?

A: I wanted to report a story about going undercover inside an Amazon warehouse, so I applied, and was accepted, to a seasonal job there. Just before the warehouse work was to begin, Amazon sprung the agreement on me. I couldn’t quite believe my eyes: Given the nature of the job — it paid a few dollars above minimum wage for sorting and packing products during long night shifts — the restrictiveness of the contract seemed really striking. And the agreement did end up preventing me from working in the warehouse. It includes a strict non-disclosure section that, at least technically speaking, I don’t think I could have honored while reporting from inside the warehouse. So I didn’t sign, and, as a result, Amazon did not allow me to work in the warehouse, but I got to keep the contract.

Q: Amazon has promised to get rid of the non-compete clause for hourly workers. Did they give any timeframe for when that was going to happen?

A: The Guardian article is the only response I’ve heard from Amazon, and I don’t think there was much indication of a timeframe there.