Megan Twohey wins the October Sidney Award for exposing a subculture where parents go online to give their adopted children away to strangers with no oversight from social workers or the courts. Children may find themselves bounced from one unfit home to another or even handed over to sex offenders.

“I am totally ashamed to say it but we do truly hate this boy!” a mother posted about the 11-year-old son from Guatemala whom she was trying to give away online in July 2012. Another woman complained that she’d bought a “pig in a poke” when she adopted her Russian daughter.

Twohey discovered a private “rehoming” subculture, modelled on the “rehoming” groups that reassign unwanted pets. She and her Thomson Reuters colleagues constructed a massive database of over 5000 postings from a single Yahoo rehoming group over a five-year period, during which time, a child was put up for rehoming about once a week on average.

“How would you give me up when you brought me to be yours?” asked Quita of the adoptive parents who had dispatched her to live with a woman who had lost custody of her biological children and who was suspected in the drowning death of another child in her care. The woman “rehomed” at least six children. Once the woman teamed up with her roommate, a convicted child pornographer, to pick up a little boy in a parking lot. 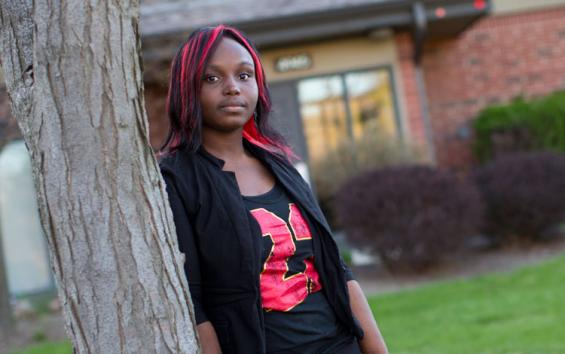 Megan Twohey wins the October Sidney Award for "The Child Exchange", a groundbreaking five-part exposé of a subculture where adoptive parents give their children away to strangers over the internet with no oversight from social workers or the courts. Children may find themselves bounced from one unfit home to another or even handed over to sex offenders.
Credit: Reuters/Jeffrey Phelps

Q: What is “private rehoming” and how does it relate to the boom in international adoptions?

The term, in the context of Megan’s series, refers to informal arrangements between adults to transfer custody of a child from one home to another. Often, those transfers begin in online bulletin boards, where parents who have a child they are struggling to raise meet parents who want a child. We found that children who were adopted overseas and brought to the United States were particularly susceptible to being “re-homed.” Americans have adopted about 243,000 children from other countries since the late 1990s. But many of those parents received little or no training, and they have been unprepared for some of the problems they have encountered: children with severe emotional problems. Now that some foreign governments have created new obstacles to Americans adopting, some members of the online bulletin boards say the Internet groups could become what one called “the ‘latest country’ to adopt from.”

Q: How is it possible for parents to give their adopted children away on the internet without oversight from social services or the courts?

If courts or social service agencies are not notified of the transfers, they might never know it took place. That’s part of the allure of the Internet groups: Like-minded parents meet there and decide to handle custody transfers privately, through a basic “power of attorney” document. The document needn’t be filed anywhere, but it is presented to schools when the new “parents” seek to enroll the child.

Q: What drives a parent to simply give a child away to strangers on the internet?

In a word, desperation. The parents who turned to the Internet forums talked about how desperate they were for help. Often, they said, the children they adopted overseas brought with them behavioral problems that proved overwhelming, and the parents decried the lack of government assistance. In some cases, they said, they grew afraid of the child they adopted and looked to others to take in the child if only to protect those in their households.

Q: You report on a couple, the Easons, apparent serial offenders in “re-homing” and neglecting children. What was their modus operandi?

Online, Nicole Eason went by the names Big Momma and Momma Bear. Megan found that Eason used the online bulletin boards to reach out to parents who were seeking new homes for unwanted children. Her biological children, a boy and a girl, had been taken away from her by government authorities; one sheriff’s report indicated that the “parents have severe psychiatric problems as well as violent tendencies.” The Easons did not share that information with the parents they reached out to online, and those who sent their children to the Easons explained to us that they considered the Easons to be sincere. One told us that Eason “seemed wonderful.” The Easons also presented to prospective parents a “home study,” an assessment of prospective parents that’s supposed to be done by a social worker who visits the house. The Easons fabricated theirs. Although it fooled one family (even though the father was a police officer), we found reasons to question the document that he didn’t spot. First, the address listed for the social worker who purportedly did the home study is a P.O. box that corresponds to one listed under the name of Nicole’s biological daughter, who was taken away from the Easons years earlier. Second, the social worker listed on the fake home study is the name of a child welfare worker in another state; that woman had in fact visited the Easons’ home in 2002, but it wasn’t to vouch for their parenting. Rather, it was to take away their infant son.

Q: Computer-assisted reporting (CAR) is a centerpiece of this investigation. Describe the database you created to study the private re-homing phenomenon.

The U.S. government doesn’t keep track of how often children are “re-homed,” and typically, child welfare authorities aren’t involved in the process. We wanted to get a sense for the frequency that children were being advertised, and to understand more about the parents who are looking for new homes for their kids and those who are interested in taking the children in. That led us to examine an Internet bulletin board that, during the five-year period we examined, was one of the most accessible and accessed groups used for “re-homing.”

Megan worked with data journalist Ryan McNeill and reporter Robin Respaut to analyze 5,029 posts from the Yahoo group called Adopting-from-Disruption. The posts became the foundation for a database that enabled us to offer a snapshot into how these children were passed from household to household. It was one of eight online bulletin boards we identified that participants used to advertise unwanted children.

Most of the children were international adoptees (at least 70 percent) and ranged in age from 6 to 14 (the youngest was 10 months old). We determined that some participants in that group both offered and sought children for re-homing, sometimes simultaneously. Others sought new parents for children who already had been re-homed. For instance, we found that a 10-year-old boy from the Philippines and a 13-year-old boy from Brazil each were advertised three times.