NEW YORK: The Sidney Hillman Foundation announced today that Jose Antonio Vargas has won the June Sidney Award for “My Life as an Undocumented Immigrant,” published in the New York Times Magazine.  There are approximately 11 million undocumented immigrants in the United States. Vargas’s piece illustrates that their stories do not necessarily align with the usual media stereotypes.

Since the story ran, Vargas has appeared on CNN, MSNBC, ABC, Fox News, the Colbert Report and NPR, re-igniting the discussion on immigration reform. Vargas has also started Define American, an online campaign advocating for the DREAM Act, bipartisan legislation currently stalled in Congress, which would enable undocumented youth who were brought to the U.S. as children to earn legal permanent residency.

Vargas arrived in America in 1993 at the age of 12, believing himself to be a legal immigrant from the Philippines. Seeking a better life for her son, his mother sent him to live with his grandparents in Mountainview, CA. He only learned that he was undocumented when he tried to apply for a driver’s license at age 16.

Vargas reasoned that if he hadn’t been given citizenship, he would have to earn it—by perfecting his English, excelling in school, and most importantly, by writing. Using forged documents he set out to pursue a career as a reporter, which took him from his hometown paper to the heights of American journalism.

Vargas shared a Pulitzer Prize, profiled Facebook founder Mark Zuckerberg for the New Yorker, and saw his reporting on HIV turned into a documentary. But this all this time he lived in fear that his secret would be discovered. Finally, he decided that he was done hiding and set out to report the story of his own life as an undocumented immigrant.

Jose Antonio Vargas is an award-winning multimedia journalist. Most recently, he was a senior contributing editor at The Huffington Post, where he launched the Technology and College sections. Prior to that, he covered video game and tech culture, HIV/AIDS, and the 2008 presidential campaign for the Washington Post, and won a Pulitzer Prize as a part of a team that covered the 2007 massacre at Virginia Tech. His articles on the AIDS epidemic in the nation’s capital inspired a feature-length documentary, “The Other City,” which he co-produced and wrote. It world premiered at the 2010 Tribeca Film Festival and aired on Showtime. An early chronicler of the social media revolution – which he’s referred to as the “me-in-media” – he wrote an intimate profile of Facebook co-founder and CEO Mark Zuckerberg for The New Yorker. 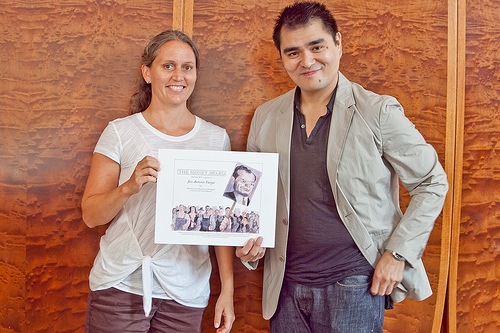 How did you decide to write about your own history as an undocumented immigrant?
It was time. This is a story I’ve been too afraid to tell, certainly too afraid to write about. Lawyers advised me not to write it, especially not the way I wanted to write it. But my mind and heart were set. Mine is just one of countless untold and unexamined stories of undocumented immigrants across America: of all ages, from varying ethnic backgrounds, interwoven in every fabric of our society. I’ve been a working journalist for more than 12 years, and the most useful kind of story to me is one that illuminates a greater truth – a shared experience. Thankfully, I worked with editors (some from the Washington Post, others from the New York Times Magazine) who made the essay better and fuller. To write about oneself is always challenging, and I was fortunate – I am fortunate – for being ready and able to write the truth.

You wrote the piece without knowing what was going to happen. What is your biggest fear?
From the legal point of view, I am ready for anything and everything that could happen. But more than that, I was afraid that the story may not resonate, that it would not have impact beyond the here and now, beyond myself.

What impact has the piece had so far?
People are talking about immigration in a different way - at least that’s been the biggest impact judging by the tweets, Facebook messages and emails we are getting at DefineAmerican.com. Our small team at Define American – all close friends of mine – set out to change and elevate the conversation around immigration. We’re succeeding, and we’re just getting started.

Have you had any response from immigration authorities?
No.

How did you come to write the piece for the New York Times, specifically?
The essay was originally intended for the Washington Post, where I was a reporter for a little more than five years. I owe the Post a great deal of my professional identity. I love that newspaper – always have, always will – and I felt it was the right place for the essay to run. But after weeks of rigorous editing, after the piece was ready to go, the Post’s top leaders decided it was not right for them. Thankfully, Peter Baker, a friend and a former colleague at the Post who’s now at the New York Times, helped me get the essay into the New York Times Magazine. Editors at the Magazine quickly grabbed the story. I am grateful to them.

Some media critics have argued that you shouldn’t have covered immigration or immigrant-related stories while your status was still undisclosed because you had a bias. Do you feel that someone who is out-of-status has any more of a bias than someone who is in-status?
Reporters are just like other human beings. Our identities and backgrounds inform how we see the world and serve as a lens in which we see other people. Having said that, it’s less about who is doing the reporting and writing and more about how a story is reported and written. Regardless of one’s background, a news story should be judged by how insightful, fair and accurate it is. By those standards, my work speaks for itself. And it will continue to speak for itself.

Tell me about the Define American project? What is it? What do you hope to accomplish?
Define American is about changing and elevating the way we talk about immigration in this country. It’s a new way of looking at an old issue. Illegal immigration is not just about the undocumented immigrants in our country. It’s also about the American citizens, from pastors to principals, who are members of what I’ve been calling the 21st century Underground Railroad. These Americans have stepped up where the government has failed. If anything else, Define American can reframe how we talk and examine this issue. In a country that’s been built and replenished by immigrants, we have a very narrow and misinformed way of dealing with immigration.

What are your predictions for the DREAM Act?
The DREAM Act is almost 10 years old. The failure of the DREAM Act – and other immigration reform-related legislation – to pass through Congress is a testament to how broken our politics are when it comes to this very important issue. We have failed, and failure is unacceptable.