Ian Frazier wins the March Sidney Award for his account of the strike at the Stella D'oro biscuit factory | Hillman Foundation
Skip to main content
Sign up to receive winner announcements, Calls for Entries, Sidney's Picks, invitations and more.

New Yorker writer Ian Frazier won the March Sidney Award for his account of the strike at the Stella D’oro biscuit factory and its subsequent closure after being a fixture in the Bronx since 1930.

In August 2008, all 134 Stella D’oro workers went on strike to protest the wage and benefit cuts demanded by management. With these cuts, many of the workers would no longer be able to afford housing, healthcare, or send their children to college, which previous generations of Stella D’oro workers had been able to do. Management dismissed the workers, reasoning that any job was surely better than none.

The National Labor Relations Board found that the current owner, Brynwood Capital Partners, which had purchased the once family-owned company from RJR Nabisco/Kraft in 2006, had negotiated in bad faith, and ordered the strikers back to work. But rather than reinstate the 134 workers, Brynwood sold Stella D’oro to the notoriously anti-union Lance, Inc. in 2009, which relocated the plant to Ashland, Ohio without rehiring any of the original workers.

“The story of the Stella D’oro strike illustrates the challenges facing the labor movement when confronted with private equity firms that have no stake in preserving communities or running successful businesses for the long haul,” said Hillman judge Lindsay Beyerstein. “The Stella D’oro workers won the strike, but they still lost their jobs.”

Ian Frazier is a staff writer for The New Yorker magazine. He has been contributing to the magazine since 1974. 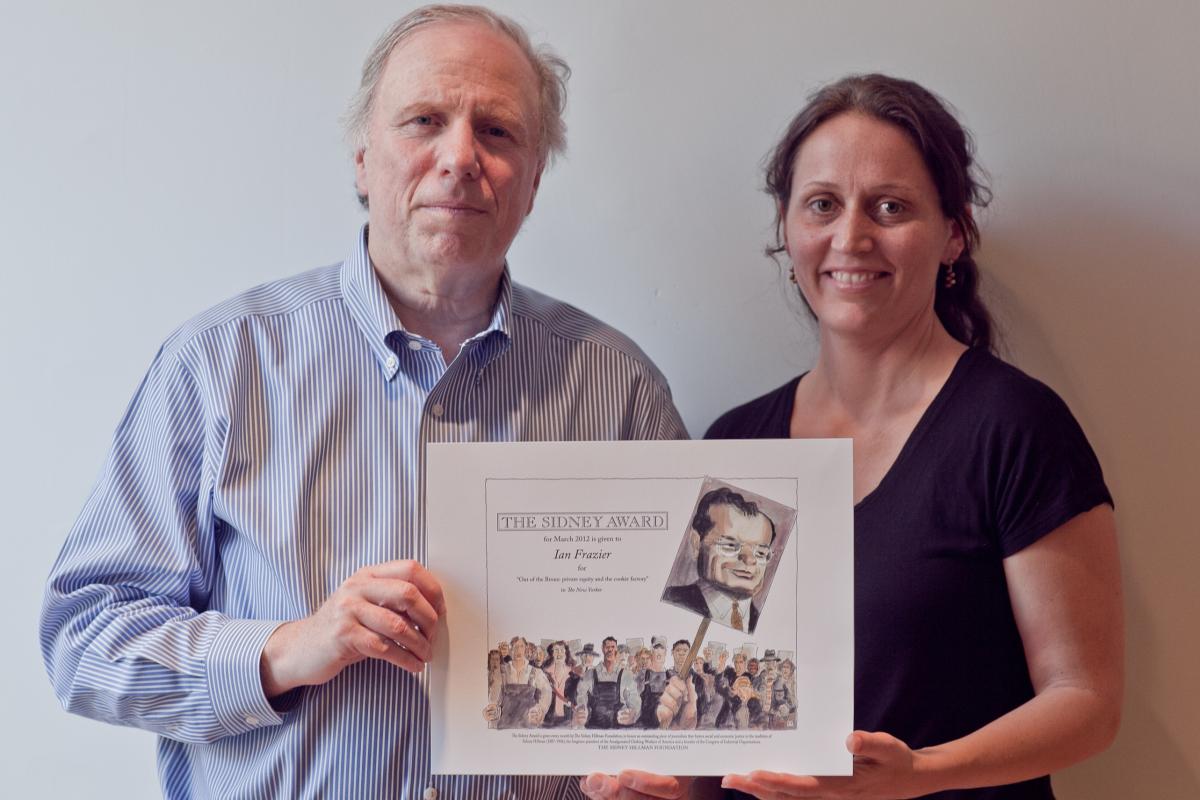 Lindsay Beyerstein spoke with Frazier about his piece:

1. We tend to assume that small family-owned companies are uncompetitive. Yet, at the height of its success, Stella D’oro was a family-run business that offered good wages and benefits. Why was it sold to RJR Nabisco, and what happened next?

When Stella D’oro was run by the Zambetti family, it found a solid market among urban ethnic customers, especially Jews who wanted a kosher cookie. People had a real affection for the product. But the Zambettis had owned the company for two generations and no one in the third generation wanted to run it. The death of one son in the San Francisco earthquake of ‘89 made the sale inevitable. He had been the only third-generation Zambetti with an enthusiasm for the business. Bigger companies were offering attractive prices, so the Zambettis decided that the time had come to sell.

2. You write that the Stella D’oro workers won the strike but lost their jobs. How did this happen?

They won the strike because the NLRB ruled in their favor and ordered them to be reinstated in their jobs under the previous contract. They lost their jobs because the owners responded to this decision by selling the company to a bigger company that moved Stella D’oro to Ohio and did not bring the employees along.

3. An executive from Brynwood Partners, the private equity firm that owned Stella D’oro before and during the strike, later told you that his firm was the “loser of this deal.” What do you think he meant by that?

The head of Brynwood Partners would not speculate about what Brynwood should have done differently. He was not of an inclination to compromise, however. He thought the union was impossible to deal with.

4. How big were the wage and benefit cuts that the Stella D’oro workers were asked to accept?

5. The National Labor Relations Board ruled that Brynwood improperly held back a 2007 financial report from the union. Why do you think they refused to hand it over?

I don’t know why Brynwood refused to hand over the financial report. They say the strikers could look at the report on site, in Brynwood’s offices, and take notes on it; i.e., Brynwood says the report “was made available to” the strikers. The NLRB found that Brynwood’s position on releasing the report constituted bad-faith negotiation.

6. Lance, Inc. moved the production of the cookies to the Archway plant in Ashland, Ohio where, through a similar twist of fate involving another private equity firm, formerly unionized workers had been laid off and re-hired to work non-union jobs. Why do you think the formerly unionized workers who were rehired at the Archway plant weren’t interested in re-unionizing?

The re-hired Archway workers were scared of their new employers, Lance, Inc., which is known to dislike unions. The workers had been unemployed for a while and were just glad to be working again.

7. What does the story of Stella D’oro have to teach us about the challenges facing unions in today’s economy?

I’m afraid it teaches us that the situation is daunting. People tend to respond to unionization the way the re-hired Archway workers did. Another lesson is that when income inequality gets beyond a certain point, negotiation becomes much more difficult. The Stella D’oro workers could not understand why they would no longer be able to send their children to college, while the private equity folks just up I-95 in Greenwich were telling their investors they offered returns of 28 percent a year. How unions will benefit from increasing inequality– what additional leverage or power it will give them– I couldn’t say.