Greg Palast wins December Sidney for Exposing a Defective Database that Endangers the Votes of Millions of People of Color | Hillman Foundation
Skip to main content
Sign up to receive winner announcements, Calls for Entries, Sidney's Picks, invitations and more.

Greg Palast wins the December Sidney Award for “Jim Crow Returns,” and “Challenging Crosscheck,” a two-part Al Jazeera America exposé that shows how millions of innocent people were flagged as suspected vote fraudsters because they have the same first and last name as someone in another state.

On the eve of the 2014 elections, officials had begun to purge voters based on Crosscheck, with over 40,000 voters being dropped from the rolls in Virginia alone.

The Interstate Crosscheck program, used in 28 states, is ostensibly designed to prevent voter fraud by identifying people who voted in different states in the same election. The system is billed as a sophisticated fraud-detection tool, but Crosscheck lists obtained by Palast for three states show that the system matches on first and last name alone. Crosscheck had pointed the finger at over 2 million names in these three states alone, Palast found.

In the states Palast studied, anyone with a common name is at risk, but the system disproportionately flags voters of color: If you’re white, you have a 1 in 11 chance of being flagged. If you’re Asian or Hispanic, your odds are 1 in 8. If you’re black, the odds are 1 in 7 that someone in another Crosscheck state shares your first and last name.

Check Al Jazeera’s interactive database to see if your name is in on the list.

State voting officials send postcards to voters whose names show up on Crosscheck. If a card isn’t sent back, the voter is purged. Poorer people are statistically more likely to miss the postcard because they change addresses more often.

Greg Palast produces investigative reports for the Guardian, BBC TV, and other outlets. Before becoming a reporter, he was an investigator of corporate crime and racketeering for governments and labor unions worldwide. He is the author of several books including “The Best Democracy Money Can Buy” and “Vulture’s Picnic.”

Al Jazeera America’s broadcast of “Crosscheck” was produced by Hanaan Sarhan, with Richard Rowley as director of photography. 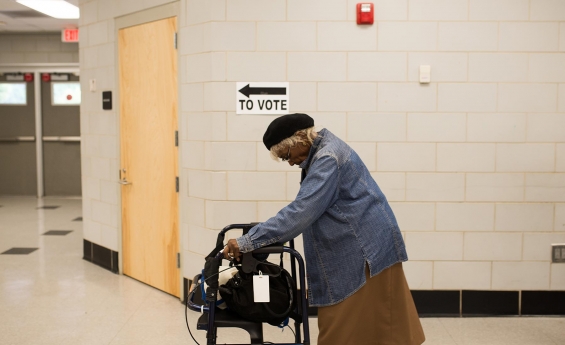 Q: What is the Interstate Crosscheck program, and who runs it?

A: The elections chiefs of 28 states, almost all under Republican control, use “Crosscheck” to hunt for so-called “double” voters, those who vote twice in the same election, once in two states.  Voting twice is a go-to-jail federal crime—and Crosscheck has tagged SEVEN MILLION Americans as “potential duplicate” voters. Yet this year, not one was arrested.  Why?  Because almost NO one commits this crime.

So why do they run Crosscheck?  Because Crosscheck allows these 28 “Katherine Harris” wannabes to purge TENS OF THOUSANDS of voters from voter rolls in each state.

Until our investigation for Al Jazeera America, despite many stories praising this “anti-fraud” program, no reporter had actually seen a Crosscheck purge list.  State agencies claim these millions are all criminal suspects in an on-going confidential investigation.  It took our team six months of mind games with politicos to get our hands on the list of 2.1 million of these “suspects.”

What we discovered was that Crosscheck was no more than a massive list of common names:  John Jackson, Juan Rodriguez, David Kim and so on. Using sophisticated database analysis (assisted by a crew of the experts who have done this work for EBay and American Express), we found that the lists’ “matches” were bogus.  Example: one out of four suspects had MISMATCHED middle names. Typical: JAMES ELMER BARNES JR. of Georgia supposedly voted a second time, in Virginia, as JAMES CROSS BARNES III.  Mr. Barnes Jr. told me he has never been “Cross” or “Third.”

And while press releases promised names were matched by Social Security numbers and birthdates, NONE were. And the purge was racially bent.  The methods used to purge those on the list guaranteed it would disproportionately wipe out the rights of Black, Hispanic, Asian, poor and other “blue” voters.

In 2000, for the Guardian and BBC, I discovered that Katherine Harris had purged the registrations of 58,000 Black voters, tagging them “felons” who could not vote.  None were guilty of any crime other than Voting While Black.  “Crosscheck” repeated the same game; but in a form more sophisticated, better concealed and far, far wider in its reach and effect.

You can see if you’re on the Crosscheck list…just click here to search your name in the interactive database we created for the story.

Q: Kansas is offering to let other states join the program for free. Why is Kansas so keen to subsidize distant states like Alaska or Hawaii?

A: The extraordinarily partisan Republican Secretary of State of Kansas, Kris Kobach, runs the Crosscheck program computation operation for all other states at no charge.  As you can see in the Al Jazeera television broadcast, Kobach says, “Take double voting, it’s a slam-dunk to prove that.” But Kobach’s state, despite wiping out the voting rights of thousands over seven years, has not convicted even ONE person of voting twice.  So why sell this program across the states at Kansas taxpayers’ expense?  Answer: it’s incredibly effective at erasing low-income and voters of color — that is, not Kobach’s color.

Q:  How many open records requests did you have to file to get the data for this story? Were any of the records especially challenging to obtain?

A: It was absolute murder trying to get the Crosscheck lists out of the hands of these highly political agencies.  They absolutely did not want to hand the lists over.  They knew damn well the lists were phonies—just common ethnic names, an excuse to knock off Democrats— and dynamite if exposed.  I must have had 20 conversations with the Secretary of State’s PR flack in Ohio—who never gave us their names.  They sent us press releases and a good line of BS that had effectively conned other reporters into praising their “anti-fraud” program.

And once we got the raw data, we had to analyze it.  That crew was headed by expert Mark Swedlund.

Q: You performed your own analysis and you also shared the lists with activists who are continuing to analyze the data. Have they released any notable findings since the story ran?

A: Al Jazeera showed the data to voting rights groups such as the Asian-American Legal Advocacy Center (Atlanta), Martin Luther King III and the pastor of the Ebenezer Baptist Church principally for their reaction—and to help us locate these allegedly criminal double voters.  Next to MLK’s old church was a senior home which, according to Crosscheck, housed TEN felony-committing double voters, all of them African-American.  We confronted one, Joseph Naylor, who literally swore on an open Bible, that he never voted twice.  He signed a sworn legal affidavit to protect his vote.

But I also showed the list to Republican Party leaders (I was invited to a Georgia country club fund-raiser) for their reaction.  They defended the need to stop voter “fraud.”  In North Carolina, I surprised state election officials with their Crosscheck list. They thought they’d hidden it well.  They assured me the list contained real criminals — but after six months, they couldn’t find one — though they had the “double” voter’s names, addresses, phone numbers — and voting location.

Q: You determined that the Crosscheck program is more likely to flag people of color as double voters, how much more likely?

A: The Census tells us that voters of color are 67% more likely to have one of America’s 1,000 most common names than a white voter.  It is not surprising to find two voters named John Jackson —because there are 86,001 John Jackson’s in the USA, the majority of them Black. But the real method of biasing the purge is that those on the list were removed only if they did not respond to a postcard at their voting address.  As one of our experts, Michael Wychocki, said, a white middle class family in the suburbs does not change addresses every year or two. A poor, urban renter often switches apartments every year.  Hence: if you move, if you’re foreclosed, if you ignore the junk-mail from the state, you lose your rights.

Q: In a follow-up post, you note that the number of voters disqualified by Crosscheck was larger than the margin of victory in several closely fought U.S. Senate battles. Could the Crosscheck program have tipped the balance of power in the Senate?

A: I used to teach statistics, so I had grim fun calculating the effect of Crosscheck.  With assistance from other vote suppression techniques, it was pretty easy to calculate that voter-list trickery flipped the Senate races in North Carolina and Colorado at the least. North Carolina’s Crosscheck list tagged a brobdingnagian 589,393 voters. Without doubt, Kansas’ Kris Kobach saved his GOP governor Sam Brownback from near defeat with Crosscheck cleansing of voter rolls.

Q: You know how many names were purged from the rolls in Virginia, do you have any sense of how many people showed up at the polls and were turned away on election day because of Crosscheck? Does everyone who gets flagged by IC get purged automatically, or are there other factors at play?  What percentage of people who are flagged by Interstate Crosscheck ultimately lose their votes?

A: Only Virginia would give us the count of voters purged—64,000 in that state in one year—about 19% of the number on the Crosscheck list. More will get crossed out. Virginia is typical. The purge process is a slow, tricky, secretive and racially biased, as explained in the articles.

Therefore, we won’t see the full effect until the 2016, when Crosscheck purges will hit with full force.

Q: How many names were flagged for suspected double voting this election cycle? How many of those people actually voted twice?

A: Despite the massive purge that hit thousands in each Crosscheck state—and seven million on the list of “suspects” and a full-time staff of double-vote hunters hired by North Carolina, not a single voter on the list has been charged with this crime.

Yet, despite reports from Fox News to the Washington Post praising efforts to eliminate “double voters,” not one US-owned outlet has retracted this bogus “voter fraud” story.