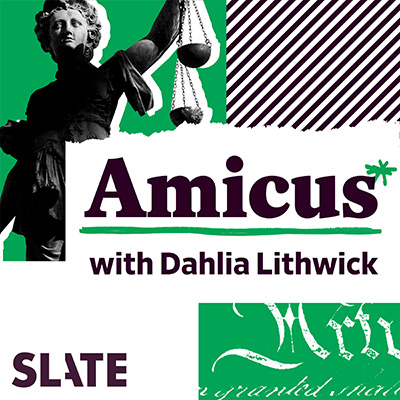 Dahlia Lithwick has been the nation’s best legal commentator for two decades. As a senior editor for Slate, her columns have fearlessly scrutinized the failings of the justice system. With an unparalleled ability to untangle the most complex debates, Lithwick’s analysis of the mechanics and theatrics of the American legal system is unmatched. Her dynamism, clarity, and compassion shine through in her columns.

In 2017, Lithwick’s analysis was more essential than ever. She wrote about the Supreme Court confirmation hearing for Neil Gorsuch, extracting insights on the judge’s views on religious freedom that other legal experts missed. She covered the alt-right rally in her hometown of Charlottesville, documenting what the so-called “alt-left” was doing during the horrifying event and exploring how the Nazi march changed her feelings on the First Amendment. She also brilliantly synthesized the last decade of Second Amendment jurisprudence, explaining how the Supreme Court created a gun rights crisis that it is unwilling to solve.

When the #MeToo moment came to the courts, Lithwick shared her own story of harassment at the hands of Judge Alex Kozinski, a piece that inspired many other women to come forward about the judge. She powerfully described how she came to realize that the Supreme Court pipeline “sometimes demanded the ritualized humiliation of young women.”

In a confusing and destabilizing year, Lithwick was energetically committed to defending those with less power against the abuses of those with more. With characteristic erudition and empathy, Lithwick’s columns reminded readers about the importance of maintaining both the rule of law and our shared humanity.

Dahlia Lithwick is a senior editor at Slate, and in that capacity, has been writing their “Supreme Court Dispatches” and “Jurisprudence” columns since 1999. Her work has appeared in the New York Times, Harper’s, The New Yorker, The Washington Post, The New Republic, and Commentary, among other places. She is host of Amicus, Slate’s award-winning biweekly podcast about the law and the Supreme Court.  She was Newsweek’s legal columnist from 2008 until 2011.

Ms. Lithwick speaks frequently on the subjects of criminal justice reform, reproductive freedom, and religion in the courts. She has appeared on CNN, ABC, The Colbert Report, the Daily Show and is a frequent guest on The Rachel Maddow Show. Ms. Lithwick delivered the annual Constitution Day Lecture at the United States Library of Congress in 2012 and 2011. She has testified before Congress about access to justice in the era of the Roberts Court. Justice Ruth Bader Ginsburg has called her “spicy.” Justice Samuel Alito has called her “some hack.”

Lithwick was the first online journalist invited to be on the Reporters Committee for the Freedom of the Press. And, she serves on the board of the Jefferson Center for Free Expression.

Ms. Lithwick earned her BA in English from Yale University and her JD degree from Stanford University. She is currently working on a new book, Lady Justice, for Penguin Press. She is co-author of Me Versus Everybody (Workman Press, 2006) (with Brandt Goldstein) and of I Will Sing Life (Little, Brown 1992) (with Larry Berger). Her work has been featured in numerous anthologies including Jewish Jocks (2012), What My Mother Gave Me: Thirty-one Women on the Gifts That Mattered Most (2013), About What was Lost (2006); A Good Quarrel (2009); Going Rouge: Sarah Palin, An American Nightmare (2009); and Thirty Ways of Looking at Hillary (2008).