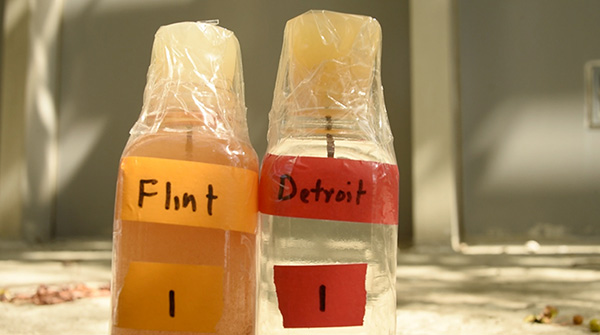 Two years ago, the ACLU of Michigan (with a grant from the Ford Foundation) hired investigative reporter Curt Guyette to examine the repercussions of a Michigan law that allows the state to put a so-called “emergency manager” in complete control of financially struggling cities, school districts and counties, usurping the power of local elected officials.

Guyette’s path-breaking work first brought the public’s attention to the water crisis in Flint, one of the cities taken over by the state.

Guyette’s investigative reporting exposed the disastrous decision by the State of Michigan to take Flint off of Detroit’s regional water system and, instead, use the Flint River.  The reason for this change was to save money. Long before the story made national headlines, Guyette explored the impact on Flint residents. He also tied the decision to the state-appointed emergency manager, which deprived the city’s residents of traditional tools of democratic accountability.

Since April 2014, when the City began using the Flint River as its water source, water-quality problems plagued Flint’s water system. In the eighteen months following the switch, the city’s drinking water was discolored, foul smelling, and “laden with sediments.” Residents reported that they experienced hair loss, skin rashes, and vomiting after drinking the water. In the summer of 2014, the City was forced to issue several boil-water notices after tap water tested positive for total coliform bacteria, which suggested a possible “pathway for pathogens and fecal contamination” to enter the water system.

In the winter of 2015, Guyette began to meet with citizen activists and residents who had been complaining about the color, smell and taste of the water they were being forced to drink, as well as the dramatically increased cost of water bills. But it was not until a resident shared with Guyette a crucial U.S. Environmental Protection Agency memo that raised concerns about elevated levels of lead in the city’s drinking water that the issue began to attract broader attention. Guyette pushed the story, helping to conceive, organize, and conduct a far-reaching independent study of the city’s water by collaborating with local residents and researchers at Virginia Tech.

That effort, with a parallel investigation Guyette conducted into the way the city and state were skewing test results in order to minimize the amount of lead being detected, alerted the public that there was a significant lead problem. That led to a second independent study by a Flint hospital that found the number of children with elevated levels of lead in their blood doubled after the city began using the river for its drinking water. The hospital study validated the ACLU’s study.

The public outcry was so intense that Michigan Governor Rick Snyder was forced to admit that a grave mistake had been made and allowed the city of Flint to return to the Detroit system. After months of stonewalling, the governor called for federal assistance and began to provide immediate aid to city residents. Flint residents need a long-term solution—a new water system.

Guyette’s work has also drawn much needed attention to Michigan’s emergency manager law that allows governors to usurp the power of locally-elected officials and move decision-making behind closed doors with minimal or no transparency and accountability.

It’s a big win that Flint has returned to the Detroit water system, but not a complete one: the full consequences of the crisis won’t be known for decades.

Guyette started his career in journalism in 1983, covering high school sports for a small daily newspaper in Davis, CA. After that, he moved to another small daily, covering cops and agriculture, local government and a U.S. Air Force base. His career took a left turn in 1990, when he hired on at an alternative newsweekly in Sacramento, where he began to learn the craft of long-form narrative journalism. Five years later, married with two young children, he moved to Detroit for a job at the Metro Times, where he worked as an investigative reporter, columnist and news editor for 18 years. The topics of his stories varied widely, from exposés that pulled back the curtain on political machinations to tales of individual struggles against systemic abuse. Along with a deep-seeded irreverence toward the powerful, his work has been shaped by compassion for the underdog, an unshakable belief in progressive politics, and a relentless desire to see justice—be it social, economic or environmental—served. Those values eventually led him to a job with the ACLU of Michigan, a newly-created position funded by a grant from the Ford Foundation, where he’s now an investigative reporter focused exclusively on issues surrounding Michigan’s emergency manager law and open government.

In January 2016, a little more than two years after he started covering his new “beat,” Guyette was recognized as Michigan’s “Journalist of the Year” by the Michigan Press Association because of his pivotal role in uncovering the Flint water scandal. The award validated the innovative approach to nonprofit journalism the ACLU of Michigan has helped to foster. The State Bar of Michigan has honored him three times for his outstanding coverage of legal issues.