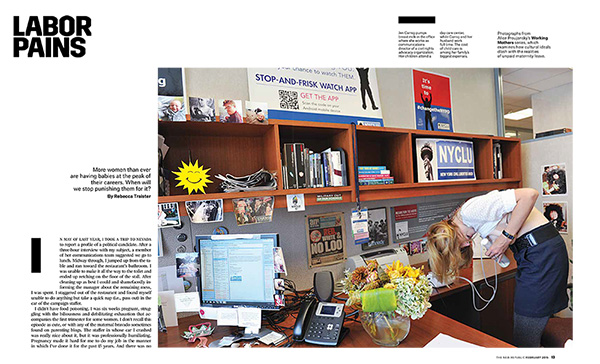 Rebecca Traister’s columns, essays, and reportage range widely but always serve a single overarching purpose: making sense of where we are in our long national journey—dotted with setbacks and tragedy—toward a finer, freer, more equal future. Her work in 2015 confirms her standing as one of America’s most incisive, most passionate observers of politics and society. Some examples:

Traister’s “Why Women Can’t Break Free from The Parent Trap,” published in The New Republic while she was on maternity leave, opens out from her own experience to consider the challenges faced by women less privileged than herself.

In “The Violence in Baltimore Didn’t Start with the Riots,” also for TNR, Traister countered the media’s insistence that “the violence started” when angry protesters threw rocks, not with the unnecessary police killing of a black man. And after the murders of nine black churchgoers in Charleston, S.C., in “Our Racist History Isn’t Back to Haunt Us. It Never Left Us,” she wrote, “We are not distant from the crimes and inhumanities and hatred of the past. We are still acting them out and still refusing to accept them for what they are: this country’s original and defining sin.”

Traister also wrote extensively about the start of the 2016 presidential campaign—specifically about Hillary Clinton, whose story, which bridges a period of enormous change for America’s women, is a window on the ways in which our past biases remain very much tied to our present attitudes.

In a summer piece for Elle, “A Hot Mess for Hillary,” Traister detailed her own ambivalence about Clinton as well as the intensity of her investment in her candidacy. The piece turned out to be a touchstone for thousands, giving voice to many readers’ own complex reactions to this remarkable figure.

During the fall, writing for New York magazine, Traister tackled a painful subject: the ultra-intense, seemingly gendered aggression she saw being directed at Clinton by some on the left. “The Bernie Bros vs. The Hillarybots” sought to dig under the epithets to unearth what was so dismaying: not opposition to Clinton per se, but the kind of opposition which suggests that feminist concerns aren’t central to progressivism itself.

Also at New York, Traister wrote about the undercover videos taken by anti-abortion activists bent on accusing Planned Parenthood of selling fetal parts. Her insight was that many who reject choice assume that women simply don’t know how reproduction works, when in fact women understand the realities—the viscera—of reproductive life very well indeed. The piece’s title: “The Big Secret of Abortion: Women Already Know How It Works.”

Finally, in “The Election and the Death Throes of White Male Power,” Traister returned to the argument that the racist and misogynist energies on view in the Republican primary are not toothless echoes of some antiquated past. Rather they reflect contemporary attitudes, resentments, and impulses, many of which have been building in the years that powerful representative figures, including Barack Obama and Hillary Clinton, have symbolized the increasing power of women and people of color.

Rebecca Traister is writer at large at New York Magazine and a contributing editor at Elle. She is the author of the New York Times best-seller All the Single Ladies: Unmarried Women and the Rise of an Independent Nation, published this year, and of Big Girls Don’t Cry: The Election that Changed Everything for American Women, a New York Times Notable Book of 2010. Traister writes about women in politics, media and entertainment from a feminist perspective, and has also written for The New Republic, Salon.com, The Nation and the New York Times Magazine. She lives in Brooklyn with her family.