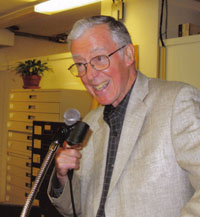 This is the second in a series of posts honoring the memory of David Montgomery, a distinguished labor historian who served as the lead judge for the Hillman Foundation’s Sol Stetin Award.

David Montgomery deserved to be the first winner of the Sol Stetin Award because he was the preeminent labor historian of his generation. No one had as big an impact on what became known as the New Labor History. This was first of all because he brought to it a distinctive shop-floor perspective, derived I think from the decade he spent as a machinist and Communist organizer before he entered academics. Once he found his footing–his dissertation on the labor movement during the Civil War era, while impressive, was more conventionally conceived–Montgomery never deviated from the view that the central subject of labor history should be, as he wrote in an influential collection of essays, “the battle for control of the workplace,” that the battle should always be seen by labor historians from the perspective of the workers themselves, and be understood as essentially political and transformative in nature. Hence the reservations he held about the New Deal, which, he wrote in a prescient essay, “was simultaneously liberating and co-optive for workers,” at once rescuing them from the heavy hand of managerial control while opening “a new avenue through which the rank and file could in time be tamed and the newly powerful unions be subjected to tight legal and political control.” A challenging perspective like this one is the essential ingredient in energizing a field of study.

History is, of course, a joint enterprise, and others with different ideas, pioneers like Herbert Gutman, are also to be credited for the New Labor History. No new subject can be the product of one person. But more than anyone else, it was Montgomery’s scholarship, always passionately argued, that infused a subject that had been a backwater of labor economics into an innovative, core subject of study in American history. No one, moreover, excelled Montgomery as a graduate trainer, and especially in his years at Pittsburgh, he salted the field with a grand cadre of labor historians, many of them now occupying senior positions in the profession. They will no doubt be testifying in the coming days to what studying under Montgomery meant to them. But for a contemporary of David’s like myself, what I most admire is that he entered an essentially dead field and made a live subject of it. And it is for this, that at his death, I celebrate David Montgomery’s life.